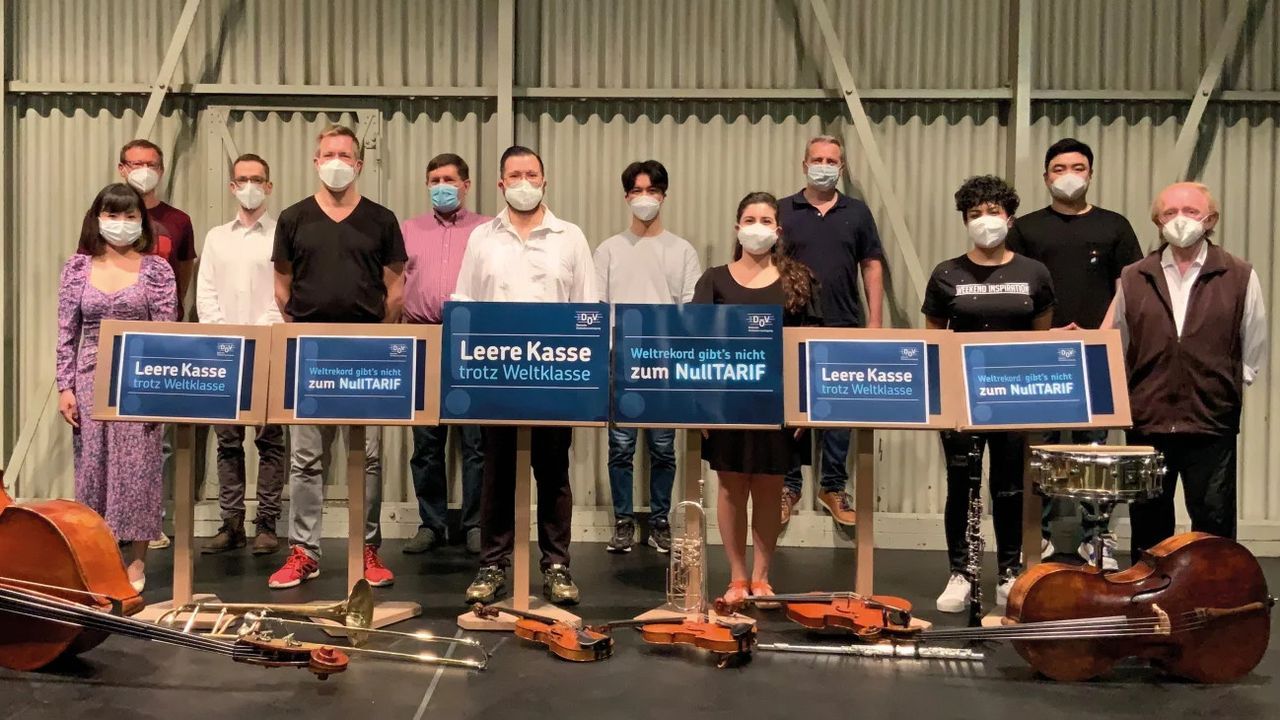 In November, Burghard Toelke, director and concertmaster of the Staatsbad Philharmonie Kissingen in Bavaria, Germany, was fired days after musicians in his orchestra staged a protest.

At Toelke’s initiative, the orchestra members demanded better pay, shorter working hours, bonuses for extra non-professional work, and clear vacation and travel rights. This summer Bad Kissingen, along with ten other historic thermal spas, was declared a UNESCO World Heritage Site. During the commemorative ceremony for the recognition of the city, local dignitaries gathered in a luxurious setting, to be confronted with musicians wearing yellow vests with the word “Strike”.

The employer of the musicians is the Bayrische StaatsbÃ¤der Bad Kissingen GmbH and its shareholders are the State of Bavaria and the city of Bad Kissingen. The city’s mayor, Dirk Vogel, is a member of the Social Democratic Party (SPD). As recently as 2012, his SPD predecessor, Kay Blankenburg, spoke enthusiastically about the spa orchestra, which is listed in the Guinness Book of Records for performing 727 concerts in a single year.

In 2018, the orchestra was renamed Staatsbad Philharmonie Kissingen. The name was intended to emphasize the high musical level of the orchestra and to attract young, well-trained candidates. Within a few years, a large part of the orchestra was to retire. The new conductor was violinist Toelke, an exceptional musician with international experience who embarked on artistic work with flying colors.

Toelke was fascinated by one peculiarity of the Staatsbad Philharmonic: it maintains the tradition of the Great Berlin Salon Orchestra, a delightful ensemble of 13 strings, winds, percussion, piano and harmonium, capable of playing practically “anything”. The demands placed on musicians are considerable. All are soloists. Many are masters of two instruments.

In a short time, the orchestra transcribed many parts of historical scores in hard, unpaid work. Its sheet music archive has grown to around 3,000 works ranging from baroque to operetta, musicals, big band jazz pieces, hit songs, The Beatles and classical music. Works performed included pieces by Beethoven, Wagner and Tchaikovsky, as well as Dvorak’s famous â€œNew Worldâ€ symphony, all of which normally require a large orchestra.

The orchestra is quickly sought after beyond the limits of the spa. A premium annual ticket has widened its audience beyond the city. Subscription concerts with renowned singers increased its appeal. The orchestra’s employer emphasized the quality of the ensemble to the public. However, in September, management responded to the orchestra’s demand for a collective agreement by firing two young musicians shortly before the end of their probationary period. Spa visitors and local residents joined in protests against the unfair action, while other orchestras sent letters of solidarity. The highlight of the events was a joint concert with musicians from eight different orchestras in front of the town hall.

The city initially refused to reverse the layoffs. Instead, the orchestra received the â€œofferâ€ of a salary increase far below the salary to which orchestral musicians are entitled based on their years of service. The offer put orchestra members on the same financial footing as newcomers to the profession. The orchestra’s weekly working time was formally reduced from 40 to 30 hours, but its request for 9 weekly concerts instead of 13 was rejected. In practice, this meant that the amount of work required to prepare for concerts had to be done either in unpaid overtime or in fewer hours, all to the detriment of musical quality.

In the press, the ensemble, whose artistic level had previously been praised for having made Bad Kissingen a leading â€œcultural placeâ€, is now accused of being â€œtoo goodâ€. He was striving to achieve an unnecessary level of quality, complained the local SPD faction leader. The demand was raised by the Staatsbad GmbH for the orchestra to focus again on ‘key tasks’, i.e. providing nice background music to spa clients, which prompted a musician to comment sarcastically that only one player on a ship’s piano was clearly needed.

Mayor Vogel’s letter to DOV, the orchestra’s union. is scandalous. He reiterates the rejection of collective bargaining and provocatively asks whether a public employer was prepared to “permanently employ an orchestra whose members are expected to work nine hours a week, but ultimately earn the same salary as a conductor. office in the public service. ? “

Vogel outrageously equates the number of nine weekly concerts requested by the orchestra with its weekly working hours and considers the orchestra to be completely overpaid for its current total of 13 concerts. Everyone knows that the main work of musicians is invisible to the public. The concerts are preceded by intensive orchestral rehearsals and long hours of individual practice at home.

Toelke is furious that his employer’s only concern is to satisfy spa customers with an undemanding music program. He is particularly disappointed that a mayor of the SPD refuses to pay the orchestra according to a formal contract. The SPD’s response here, however, as in other areas of society, is typical. For many years, the SPD has imposed austerity measures in cooperation with the unions while seeking to dispel any opposition.

The exchange between Vogel and the DOV union is also exemplary in this regard. Instead of a strike, the orchestra’s union staged a melodious protest and said in its response to Vogel that it had “little interest in escalating the conflict”. The union hailed its role as a specialist in â€œtailor-made internal collective agreementsâ€ and explained in its latest press release that â€œthe positions in the current conflict are in fact not so far apartâ€.

Openly threatening to dissolve the orchestra, which would only like to work “nine hours a week”, the mayor of the SPD appeals to the most backward prejudices on supposedly rapacious artists. It is a serious warning which goes far beyond the city of Bad Kissingen, a categorical refusal to recognize the rights of musicians acquired in the past.

There are hardly any permanent musicians in the spa industry today. They are usually hired on a seasonal basis or replaced every few weeks, often by musicians from Eastern Europe desperate enough to work for miserable salaries. In the Staatsbad Philharmonic, the largest spa complex still in permanent employment in Germany, artists from Poland, Japan, Korea, Belarus and an excellent pianist from Iran rub shoulders with German musicians. The licensed clarinetist is from Spain, the young licensed flautist, who gave up her post in a large symphony orchestra to play in Bad Kissingen and won against 60 competitors, is from Turkey. In the meantime, the two have apparently been reinstated.

They will probably be expected to express their humble gratitude for being allowed to perform in the state which is the birthplace of Bach and Beethoven. After the orchestra’s intervention at the UNESCO ceremony, poisonous voices were raised against the role of “outsiders”, which, as Toelke recalls, also included a member of the city council.

After Toelke’s sacking, the press and the DOV orchestras union fell silent. The union did not even mention the scandalous dismissal of Toelke. However, expressions of solidarity with the small ensemble orchestra in several German states, including the Staatkapelle Berlin, show that the musicians do not view the dispute as a local issue. The same pressures apply everywhere.

For example, there are some parallels to the 2011 Berlin orchestral strike, when the city’s three opera orchestras demanded better wages under a national collective agreement – a contract that the City Senate (a coalition of the SPD and the Left Party) evaded when he left. the national employers’ association. The musicians were particularly outraged by the intention of the employing State to no longer remunerate the temporary work of the members of the orchestra and thus to create a single global orchestra based on a reduced number of musicians. In addition to unpaid overtime work for employed musicians, Senate policy involved reductions in the quality of performance of the three very different orchestras.

The 727 performances of the Staatsbad Philharmonie are impressive proof of the considerable demand for high-quality culture on a smaller scale. Toelke rightly fears other consequences if savings are made at this level: â€œWe also want to inspire children with our music. Will our school concerts be canceled now? “

The action of the musicians of Bad Kissingen and the dismissal of its musical director show one thing: the cultural needs of the population cannot be defended within the framework of trade union actions or calls for politicians. For years, German music schools have replaced permanent teachers with low-paid freelancers.

The experience of the musicians of Bad Kissingen is not unique. Especially in the two years of the COVID-19 pandemic, it has become clear how much culture is subordinated to the commercial interests of large corporations and banks, and how small cultural institutions, ensembles and initiatives are being left out.

Musicians can only defend their livelihoods and the cultural interests of the people by joining forces with teachers, parents and workers in other regions and countries on the basis of opposition to capitalism.