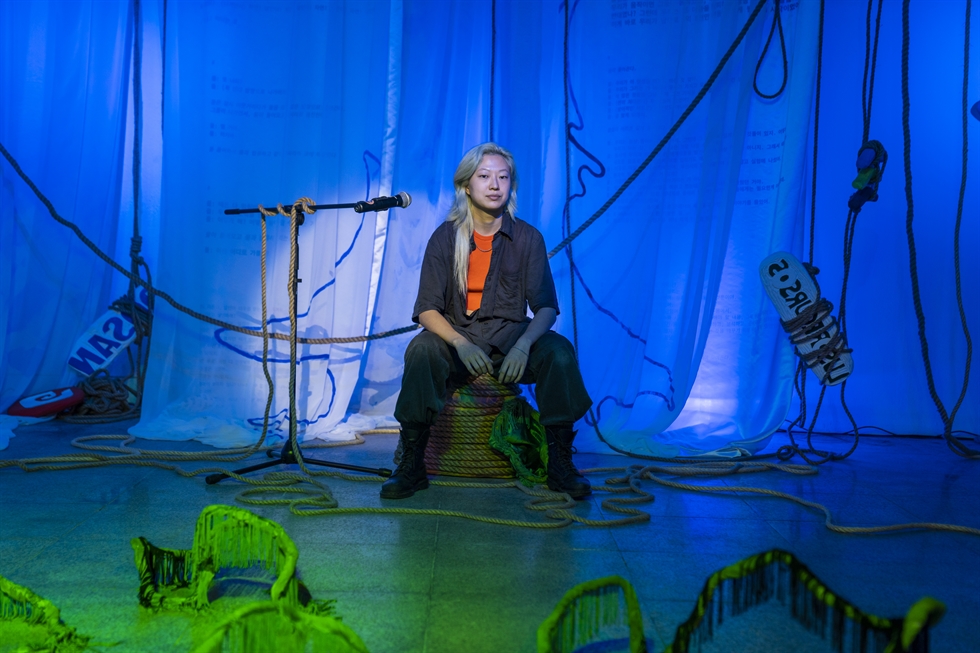 
The exhibition opened on October 1 with a performance-activation of the installation exhibited at the exhibition space, Post Territory Ujeongguk. Flooded in blue and green lighting, the performance titled “Interpermeations” featured Kim reading original text into intercut microphones throughout the installation’s stage while two performers, Shin Chae-eun, a trained dancer contemporary, and Nicholas Julian Brahim, a trained tango dancer, interacted with each other in their own respective styles and with soft, malleable, snake-like costume sculptures produced by the artist. The text read served as a type of love letter to the snake, set to the sounds of a live performance by musician And Rose Peacock.

The term “ecotone” is defined as a transition zone “where two different biological communities meet and integrate” according to the exhibition text written by Lee Jieon. The 35-minute performance evoked feelings and concepts of nostalgia, longing, transformation and violence, highlighted by the captivating soundtrack of live electronic music. The snake is an underlying theme because its Korean translation “baem” is a homonym of “interpermeation”.

“Ecotone: Ability to escape” is a “conjugation of the bond of [Kim’s] works of art and past practices” referring to the feminist theory of hydrofeminism, a term coined by cultural theorist Astrida Neimanis. Hydrofeminism views water as a primary element of our transcorporeal existence, connecting all humans and beings more than human line of thought to create conversational scenarios between four different bodies of water spanning multiple cities and continents to ultimately merge into one for a moment, however fleeting, to share memories and feelings around each other. experiences of violence that have continued throughout the hydrological cycle.

As for the text of the exhibition, “This is a ‘contact’ of time and territory and acts as an ‘escape'”. Sea, Ilgwang Beach located near the Kori nuclear power plant in Busan and various places in Portugal where lithium mines are starting to open. Each of these sites is significant as points relating to Kim’s past works, pieces having been developed with site-specific research in new exhibition venue contexts.

Once inside the installation space, visitors have the opportunity to interact with the work, “activate” the installation by speaking into the microphones, improvising or, if they wish, reading the scripts provided on printed translucent tracing paper, listening to the draped fabrics of various transparencies set up in the exhibition space with the script printed in Korean, French and English―the three languages ​​spoken by the artist. The space articulates the memory of the opening performance as pre-recorded fragments of the performance text are triggered by sounds picked up by each of the three microphones. Echoes accompany the wake of anyone in space, similar perhaps to the reverberating sounds one can hear underwater.

Mirror-carved foam logos of familiar corporate institutions discussed by Waters are set amidst the walls and strung with Manila rope, which was used by sailors for its physical quality of strengthening when wet. , as well as evoking a certain dramatic theatricality in the space.

Abstract symbols reminiscent of powerful maelstroms such as tsunamis or whirlpools are evoked through the paintings on the white fabric also suspended and intertwined by the rope. These are juxtaposed with the mental images of standard representations of the sea, generally perceived as calm, and notably feminine. In the interplay of various symbolisms and artistic gestures in rupture, Kim uses various methods of sculpture and installation to focus on the details that place the objects reproduced in different relationships to power. These details throughout the exhibit are used to create various entry points of thought and contemplation for those who visit.

While “Ecotone: Capacity for Escape” uses water as a medium to communicate a deeper understanding of Earth’s shared earthly realities, at the heart of the exhibit is a way for Kim to question and explore how community and conversations are constructed through the art and its variations permutations as an “escape” to navigate to their “home”.

“Ecotone: Capacity for Escape” runs through October 16 from 1:00 p.m. to 7:00 p.m. at Post Territory Ujeongguk in Mapo District, Seoul. Visit ru-kim.com or ujeongguk.com for more information.


Sarah Buhler lives and works in Seoul and volunteers with the healing collective, Crazy Multiply.