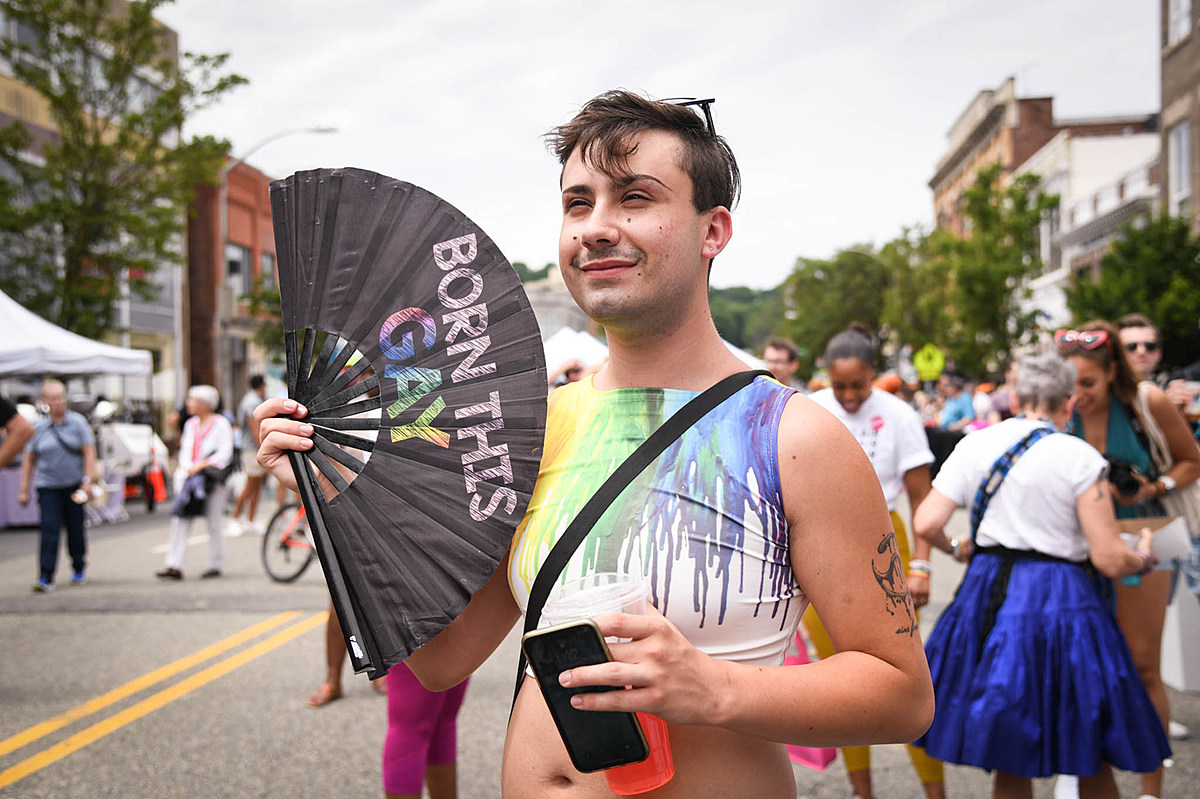 At the very first Montclair Pride Festival, “my inner child is so proud and radiant”

Carmen Carrera gazed at a sea of ​​faces – gay and straight; young and old; trans, non-binary and cis; people with myriad and varied identities, some still discovering how theirs is evolving.

“It was just wonderful to see so many people here, so many allies – and just [being] being able to share this space with you means a lot,” said Carrera, model, actress, trans activist and former RuPaul’s Drag Race contestant from the main stage of the first-ever Montclair Pride Festival. “I think my inner child is so proud and beaming right now.”

That sentiment was shared by many onlookers and attendees at the festival, which closed parts of Bloomfield Avenue, Church Street and Park Street on Saturday afternoon to accommodate more than 150 vendors and sponsors, two performance stages and thousands of residents and visitors to Montclair. And depending on the theme of the event, many expressed pride – not just in their own LGBTQ identity or alliance, but in a community that has embraced the same.

Get the free Montclair Local app

The event was organized by Out Montclair, a nonprofit created last year by Peter Yacobellis, the first gay member of Montclair City Council, to celebrate and provide space for the LGBTQ community in the Montclair area. . For Pride Month, Out Montclair and other participating community groups hosted two weeks of events, including Pride Night at the Montclair Art Museum, Reading Scripture with Pride at the Unitarian Universalist Congregation in Montclair, and Drag Queens and Donut in Rabble. Rise Donuts.

The festival itself was capped off with the Montclair Pride Concert at the Wellmont Theatre, featuring Australian singer/songwriter Betty Who, known for ‘Somebody Loves You’, ‘All of You’ and ‘All Things’, her cover of “Queer Eye’s” opening number. The event attracted dozens of sponsors, including Montclair Local, which had a table on Park Street.

U.S. Representative Mikie Sherril, a resident of Montclair whose district includes most of the township, took to the main stage to talk about her time in the U.S. Navy, while the military’s “Don’t Ask, Don’t Tell” remained in force. . The policy, from 1994 to 2011, prohibited discrimination against gay or bisexual servicemen, but only so long as they remained confined; people who were absent were excluded from the service.

“I had so many friends who couldn’t share their life or their personal experiences without friends, who had to hide who they were, who were afraid that if someone found out who they loved, they wouldn’t have a job, they would no longer be welcome to serve their country,” Sherril said.

Discussions of LGBTQ politics and rights were addressed in Yacobellis’ own speech, which highlighted the festival’s theme “Be You. Be heard.” He urged the crowd to celebrate its LGBTQ members, but reminded attendees that there are still many barriers that LGBTQ people, especially trans youth, face.

Several states have passed or are considering restrictions on gender-affirming care for trans youth, including puberty-blocking drugs and surgery. Several states and organizations have also restricted participation in sports, so athletes can only compete with others assigned the same gender at birth; for example, a trans girl would not be allowed to play on a team with cis girls.

“We live in a time of terrible verbiage and violence against anyone different.” Yacobellis wrote in his prepared remarks, shared with the Montclair local. “We must all come together to defeat this darkness. You do it by being yourself.

Yacobellis highlighted his own work in cooperation with others in the Montclair government to advance LGBTQ protections, and thanked the community for showing an “outpouring of love and support.”

Between the speakers, the main stage hosted a variety of performances, including singer Mariah Ayscue, Fab the Duo and the Broadway cast of “Jagged Little Pill.”

“They were so talented,” said Hope Riel, a festival attendee. “It was amazing to see ‘Jagged Little Pill’ since they closed on Broadway.”

The second stage—dubbed the School of Rock stage, for one of the event’s sponsors and participating organizations—featured performances aimed at young participants, such as by the Montclair School of Rock House Band and Drag Queen Story Time.

One of the books included in Drag Queen Story Time was “Mighty May,” written by couple Claire-Voe and Kendra Ocampo.

The book was written in response to a lack of books featuring families with two mothers or two fathers. The Voe-Ocampos were also the sponsors of the festival and had set up a stand where they sold their book and told their story.

Other vendors included Veronica Johnson (on Instagram as atomic_demon_art), a trans illustrator and artist who shared her booth with friend and fellow illustrator Elise Miguel (on Instagram as elisemghell). The pair’s booth was parked outside the Eclectic Chic boutique, where Johnson works, and which let Johnson use its street space.

“I was shocked at how many people were there today,” Johnson said. “People loved my artwork and were excited to support local artists. I love this community so much and I’m happy to be a part of it.

“It’s truly amazing and heartwarming to see the entire Montclair community come together and celebrate Pride in such a big way,” said Miguel.

Some booths were specifically dedicated to supporting members of the LGBTQ community, such as that of Nicolle Maroulis’ nonprofit, No More Dysphoria. The main mission of the group is to help transgender and gender non-comfortable people pay for care for their transitions. Maroulis, who identifies as a non-binary trans male queer person, started the nonprofit in 2015.

“Growing up in this region, I always admired Montclair and was disappointed that there were no outlets for young LGBTQIA+ people to explore and express themselves,” Maroulis said. “Now to see everyone coming out for the gay kids of our generation means a lot.”

Journalism like that of the Montclair Local is only possible with the continued support of our members. Sustaining memberships of $10 per month or more entitle you to our print edition and help us have the stable, predictable financial foundation that helps us plan to bring you important journalism for years to come. If you enjoy this article or others from the local Montclair chapter, consider becoming a supporting member; register with the form below.