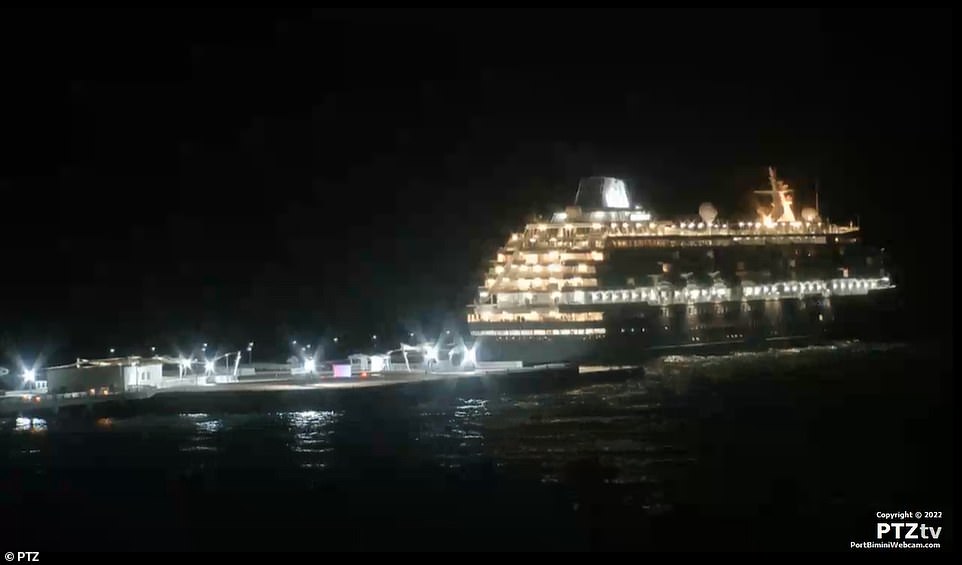 A cruise ship with 700 passengers and crew turned away from its scheduled stopover in Miami to flee a warrant to seize the ship for more than $1.2 million in unpaid fuel bills.

The Crystal Symphony, which was due to return to Miami on Saturday to complete a 14-day Caribbean cruise, instead diverted to Bimini in the Bahamas, where it docked on Saturday evening.

Elio Pace, a British musician performing aboard the Crystal Symphony, told DailyMail.com there were around 300 passengers on board the ship as well as 400 crew, a staffing ratio that reflects the struggle of cruise lines to attract passengers in the pandemic.

Crystal Cruises’ parent company, Genting Hong Kong, had filed for liquidation of the company, warning that it “will soon be unable to pay its debts as they come due”.

Now passengers are scrambling to rebook their trip after their arrival in South Florida was delayed for at least a day, and the crew faces the grim prospect of losing their jobs as the company parent of the cruise line faces liquidation.

“Every one of these people is trying to reschedule their flights,” said Pace, who said the crew did their best to keep guests informed and comfortable as the bizarre events unfolded. “There’s no panicking, there’s no tantrum, they’re taking it in their stride.”

The Crystal Symphony is seen moored in Bimini on Saturday night after turning away from its scheduled call to Miami to avoid an Admiralty Law arrest warrant for unpaid fuel bills of $1.2 million .

Elio Pace, a British musician performing aboard the Crystal Symphony, told DailyMail.com that there are currently around 300 passengers on board the ship, which can carry up to 900, along with 400 crew.

Instead of returning to Miami as planned, the cruise ship has diverted to Bimini, where passengers will take a ferry to Fort Lauderdale on Sunday morning.

The Crystal Symphony left Miami on Jan. 8 for its two-week cruise, and all went smoothly until Wednesday, when Crystal Cruises unexpectedly announced it was suspending operations until at least April.

“This was an extremely difficult but prudent decision given the current business environment and recent developments with our parent company, Genting Hong Kong,” Crystal Chairman Jack Anderson said in a statement on the decision to cease all cruises.

Pace told DailyMail.com the news stunned passengers and crew but operations were continuing as normal and he even delivered his musical performance as planned.

“It was pretty extraordinary, to be able to have to play with people, knowing that the cruise line went into liquidation,” he said. “It was a shock to everyone when we received the announcement on Wednesday.”

Crystal Cruises’ parent organization, Genting Hong Kong, has filed for liquidation of the company, warning in the filing that it will be “immediately unable to pay its debts as they come due”.

Peninsula alleged Genting affiliates reneged on a total of $4.6 million in fuel payments, including $1.2 million attributed to the Crystal Symphony alone.

On Friday, Judge Darrin Gayles of the US District Court in South Florida approved the warrant, and the Crystal Symphony now faces impoundment if it enters a US port.

Instead of continuing to Miami as planned, the ship veered east to Bimini. The Genting Group owns Resorts World Bimini and the Crystal Symphony is reported in the Bahamas.

The diversion came as a shock to passengers, said Pace, who boarded the ship on Tuesday and expected to continue giving guest performances throughout the next month.

Now passengers wait overnight for a ferry to arrive at 8:30 a.m. Saturday, to take them on a two-hour trip to Fort Lauderdale.

“For me it’s a headache, but for the crew, for the staff, the brilliant staff of this magnificent luxury liner, I feel sorry for them more,” Pace said. “I’m being fired, but they’ve lost their jobs for the foreseeable future.”

Pace blamed the fiasco squarely on the Genting Group, which is part of a larger conglomerate that also includes Genting Malaysia and Genting Singapore.

The company, controlled by Malaysian tycoon Lim Kok Thay, has been hit hard by the COVID-19 pandemic.

But Pace questioned why the ownership group couldn’t pay what they owed or face the consequences in Miami, to avoid massive inconvenience for their guests.

“They can afford to take care of these people,” he said. ‘On a human level, why do people behave like this, why can’t they help?’

“I don’t understand why these multi-billionaires don’t care, they just don’t care,” he added.

The company’s finances have been thrown into shambles after the German government this week rejected its request to draw an $88 million support facility linked to the MV Werften shipyard in northeastern Germany.

German officials have accused Genting of refusing to contribute 10% to a $678 million bailout that would protect 1,900 jobs at the shipyard.

The shipyard has filed for bankruptcy, and events on Monday triggered another shipyard it owns in Germany, Lloyd-Werft in Bremerhaven, to file for insolvency.

“The company and the group do not have access to any other liquidity under the group’s debt documents and the company’s free cash balances are expected to be depleted towards the end of January 2022 according to the company’s cash flow forecast”, Genting said in its Wednesday filing.