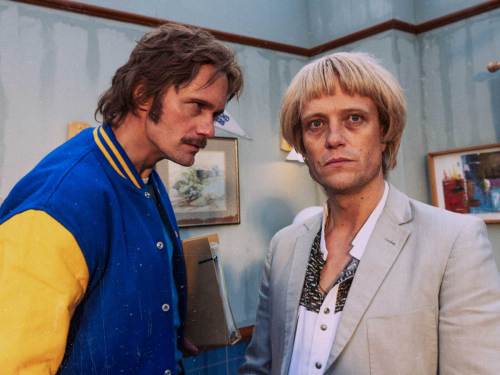 For more than half a century, Documentary now! gave us the best of Truth cinema, introducing generations and generations of documentarians to viewers across the country. Who can forget when DA Pennebaker first unveiled his groundbreaking Dylan documentary Do not look back on the show in the early spring of 1967, just before he brought it to the hippies and pranksters of Haight Street? Or the controversy that erupted when the series defied the wishes of its sponsors and broadcast Barbara Kopple Harlan County USA. in 1976? (It would win the Best Documentary Oscar the following year.) Or when DN gave Michael Moore a huge boost, thanks to the TV premiere of Roger and me in 1989? As long-time animator Dame Helen Mirren put it, it’s “the definitive collection of non-fiction films.” And this beloved TV staple remains the gold standard for bringing you the whole truth and nothing but 24 frames per second….

The intro above is, of course, an outright lie. (Other than the part on Harlan winning the Oscar. That’s right.) Then again, so is everything else Documentary now!, in addition to his very real affection for the subjects he parodies. It is possible to watch this series and does not immediately realize that everything is completely and totally false; its dedication to reproducing the look of different cinema styles, vintage film stocks and eras past, all with the utmost fidelity, is second to none. (They even used the same lens in order to perfectly capture the look of a particular artwork. Not the same type of lens — exact same lens used by the original documentarian.) Until you start to realize that, wait a second… is that old woman living in the Hamptons circa 1975 actually Bill Hader with a blindfold? And doesn’t this Inuit hunter from a 1920s newsreel look like a Fred Armisen look-alike? If there’s a better extended cinephile joke than this mockumentary anthology, we’ve yet to witness it. A subscription to the Criterion Channel and participation in at least three different Film Twitter Flame Wars should be required to view it.

The brainchild of Armisen, Hader, comrade SNL actor Seth Meyers and director Rhys Thomas, Documentary now! works on the principle that live imitation or detail-oriented Memorex is the sincerest form of flattery – and that the more real something looks, the funnier it will be when you send it or fuck it happily. Many episodes are hilarious on their own, because who wouldn’t find a performance artist played by Cate Blanchett drinking milk from a bowl and shouting “Me! UN M! HU-MANNN! at a cat funny? But if you live and breathe documentaries, or just cinema in general, you’ll appreciate what they do all the more. It’s 100% pure, uncut catnip for movie nerds. And with the new season of the show (its fourth, not his 53rd; the idea that the show predates the Nixon administration is just another part of its commitment to the bit) October 19-Nov 9 on IFC, this comedy can tick off a few other classic/popular docs from its success list.

The two-part film airing tonight, “Soldier of Illusion”, is an excellent example of the methodology of the whole project: take a well-known film or group of films – in this case, the documentary work of Werner Herzog – and try to recreate everything. about them down to Super-16mm grain in slightly faded images. Then add a generous amount of absurdity. Alexander Skarsgard does a better-than-average version of a Herzog accent that has almost become a self-caricature of Teutonic severity. Savvy viewers will notice that his behind-the-scenes look at an out-of-control production resembles that of Les Blank. The burden of dreams, which relates the achievement of Fitzcarraldo; the appearance of a wide-eyed mad actor played by August Diehl instantly brings to mind My best friend, the portrait of the director of Klaus Kinski.

But they also added the fact that this avatar of Werner is doing a CBS sitcom (Single nanny!) in the middle of a Russian no man’s land. Deep references divided by ridiculousness equals comedic genius. You can appreciate the attention to getting it even better than the real thing and if not, you’ll probably cringe at a bullshit German actor yelling at a jumping and locking dancer in front of an audience of shepherds in the studio.

The rest of the season’s episodes stick to this notion of perfect parody plus an incongruous element or unlikely setting. “How They Threw Rocks” takes an epic flashback of sports victory at the When they were kings and transposes it to a 1974 league match involving two Welshmen throwing rocks at each other until the other falls. (Whoever did these fake BBC TV animated graphics deserves 22 Emmys.) at suburban British hairdressers trying to photograph their annual hairdressing catalogues. (Once again, Cate Blanchett for the win!) Besides having the greatest title ever, “My Monkey Grifter” will ensure you never think of the tasteless, award-winning My octopus teacher again the same way. As with last season’s “Finding Gary Larson,” which gracefully fired a flamethrower at first-person narcissism, this is an unusually scathing look at a subgenre that deserves to be mocked – a letter in poison pen instead of a valentine.

Every season has its ups and downs, and this one is no different. However, each season also gets a transcendental half hour, and this new batch of Documentary now! the episode drops its lead at the very end. In season 3, it was “Co-Op”, a note-for-note revamp of Pennebaker Company: Original Recording doc which probably helped him get a release from Criterion Collection. If you knew the source material, you realized that this entry was not only funny but brilliant, monumental, a masterpiece of satirical Sondheim ribbing. “Finding Thrill” is perhaps the one that leaves casual moviegoers smiling softly and shrugging their shoulders, even though they recognize the heart in it, while moviegoers swoon. A take-off of later works by Agnès Varda (The Gleaners and me, The Beaches of Agnès, Faces Places), he nails both the philosophical spirit, the playful asides and the borderline personality of his excursions with camera and travelogue. It helps that Call my agents Lillian Rovere also does an amazing fake-Agnes. Again, if you know and love these movies, and miss the late big little giant of French cinema, it’s a sweet riot.

But then this “cinematic essay” on the director, here named Ida Leos, in search of her joy of living focuses on a notorious segment of Faces Places, when Varda went to see her old friend Jean-Luc Godard in Switzerland. He was not at home when they arrived, but had scribbled down some sort of note, referring to her late husband Jacques Demy. She took it as an insult and started crying. The fact that she died in 2019 without apparently resolving this possible sleight of hand with her new wave compatriot only makes the sequence more tragic.

“Finding Frisson” takes this scene and, for lack of a better word, “corrects” it. Here, the replacement Godard is a nursing home; Varda’s character sees it. He seems exhausted from life, which was the same word Godard himself would have said before he died in September. And this time, the two have the moment of life, brotherhood and equality that the real Varda sought and never received from the gentleman MIA. It’s such a tender and beautiful moment, smuggled in half an hour that riffs on every artistic quirk and cinematic trick she employed. The spectacle has always been a mash note for documentaries that Hader, Armisen and Co. have admired. This episode is their love letter to other moviegoers. He knows a handful of us are laughing through tears.