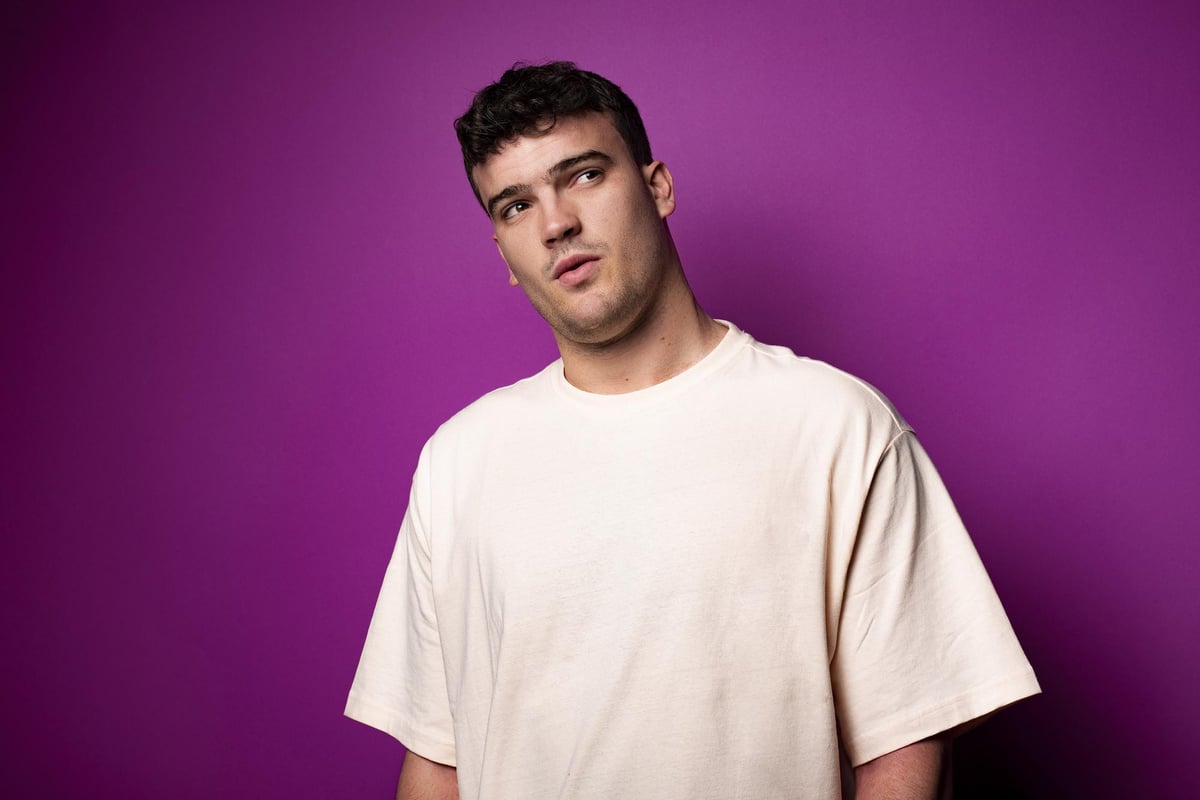 Register to our Arts and Culture newsletter

Register to our Arts and Culture newsletter

Dan is an open-hearted romantic in search of love, with a poetic perspective out of step with the crazy rhythms of modern clubs. He prefers listening to ballads, meeting relatives, gushing over a YouTube video of a duck. But towering and staring at us from the cavernous stage, there’s something about him that’s just not right.

Patrick McPherson as Dan in Colossal

In Patrick McPherson’s one-man show (co-created with James Lane), he takes us on a tour of Dan’s past romances, with men, women, business types, arty types, and it quickly becomes apparent that there were many. Approaching dating with a professionalism that can’t quite be hidden by his flippant smile, we meet him as he meets another potential match. “Nobody knows how to do that,” he sings, and we’ve all had a past, haven’t we? You may well find yourself in agreement.

On the dark side of what initially looks like a romantic comedy but definitely isn’t, Dan journeys through the familiar “beginning, middle and end” of one of his most important “tombstones.” past relationships, a woman who neither he, nor us, ever really got to know. Describing himself as a harmless, sympathetic ordinary man, “more Calpol than tequila”, he helpfully explains that breaking up “gets easier the more you play”. And while his claim that he “falls in love quickly” may seem refreshingly honest, while the mask he creates to appeal to the widest audience sometimes slips, what’s underneath is enough. horrible.

McPherson’s cleverly structured monologue slowly reveals the existential emptiness of a man who has cynically built a character to collect partners like trophies, but in doing so seems to do just as much, if not more, damage to himself. than anyone else. Is he narcissistic? A sociopath? Something worse? Should he have our sympathy or our horror? It remains for us to decide and, at the end of the show, to escape. Sally Stott

There is a subtle technical skill to this that only comes with the experience that age brings. Fringe first timer Joanna Lipari, a New York theater and LA TV veteran, defies the “cultural burka” of her 73-year-old body to relive moments in her life – the activities of daily living that make us what we are. It’s a neat presentation with Lipari’s memories illustrated by very impressive animations projected behind it. While some of these childhood anecdotes aren’t as compelling as she thinks they are, they are clearly important to her, and the series is becoming more and more engaging. At its best, like the sad story of an unfortunate one-night stand, it’s like an elegantly illustrated autobiographical comic strip come to life. It’s not just a gimmick either: Lipari interacts with these animations with quite remarkable timing. There is an endearing lightness to these – seemingly random – memories; little stories of hope, humor and sorrow. Lipari’s script demonstrates a real gift for transforming certain anecdotes into particularly evocative news. She would make an excellent graphic novel writer if she ever considered a career change. It’s never too late. Rory Ford

Move on Baphomet and push Pan – there’s a new cloven-hoofed deity in town and his/their name is Ram, a beautifully haired and tattooed rock god who addresses their herd of New Age hippies from a stepladder pulpit . Enter this place of moderate audience participation/coercion with curiosity and a sense of silliness and, after a preparatory briefing for the cult of the chief acolyte, grab your apocalypse party bag, familiarize yourself with the instruction card that is there and prepare for take-off to a higher level. plane.

Hear gonzo visions transmitted over an ambient backing track. Join the bleating song. Submit to the Finger of Truth and you could become Follower of the Week. Headbutt to some Alice Cooper-esque rock numbers played on a very small guitar – who knows what Ram is overcompensating for here, but let’s all drink in the goodness of their multiple teats in a mass milky ritual. Apologies for peeking behind the curtain, but Ram is performance artist Theodora van der Beek’s creation that satirizes key characteristics of religious cults – exploitation, sexualization, give me your all money, all your hugs and kisses too – in a fun hour that’s about as deep and witty as a Milky Bar. Fiona Shepherd

A Time Traveler’s Guide to the Present**

Time isn’t wasted watching this bewildering one-man show from energetic artist Doug Harvey, but it’s not exactly well spent either. When a signal from the past disrupts the future, a time traveler is sent back to fix things. Playing cavemen, cowboys, fathers, brothers, and a William Hartnell-esque scientist tasked with delivering a jargon-riddled exposition, Harvey deftly slides between broad comedy and heartfelt emotion. You don’t doubt that this all makes perfect sense to him because his virtuoso performance never falters, but you suspect that Harvey would be a little more successful if his material were a little less ambitious. Rory Ford

Painfully well-intentioned and very well performed by Camila Segal, it’s nonetheless hard to recommend this collage of stories about Londoners trapped in urban squalor. It’s a collection of different voices – from elderly Brazilian women to tough young drug dealers – based on true stories, but Kieton Saunders-Browne’s screenplay is so self-consciously serious that it sometimes plays like a parody. As part of Pleasance’s Generate Fund for the platform of British, Black, Asian and Global Majority artists, obvious care has been taken in the technical aspects of production and Segal clearly knows the material inside out, but it’s hard to engage in it. Rory Ford