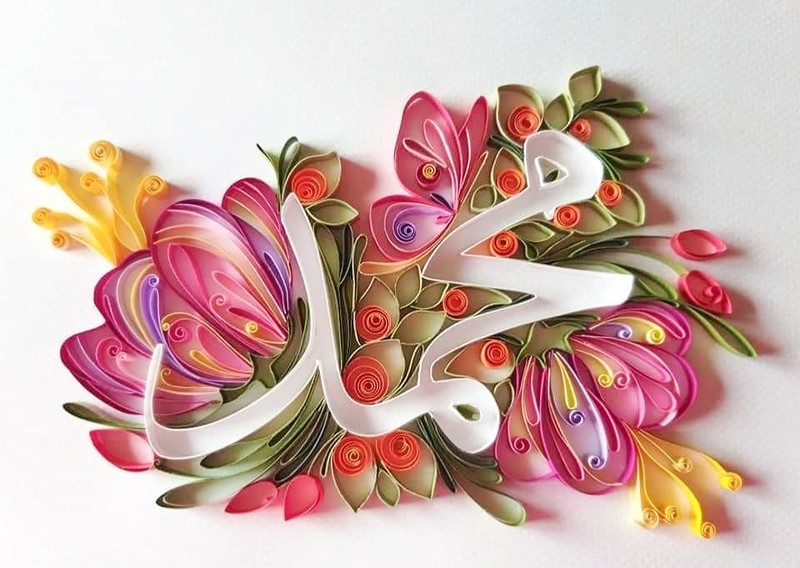 Eman al-Tayeb prefers to work early in the morning, from 3 a.m. to 6 a.m., when his house is quiet and his one-year-old son Muhammad is asleep.

“At that time, I can find calm and relaxation,” she said. “I have no worries.”

She pours herself a cup of instant coffee, puts on some classical music, and gets to work.

In her house in al-Hawabir neighborhood near Jabaliya in the Gaza Strip, she has a special room for her art of quilling.

Quilling is the practice of turning simple strips of paper into three-dimensional designs. In Arabic, it derives from the root lafmeaning wrap.

Creating a quill portrait requires precise hand movements, much like embroidery and weaving, and some of the more precise designs require a needle.

The art dates back at least to Renaissance Europe, when elaborate ecclesiastical designs were created with gold thread, but some quilling artists and guilds believe it has its origins in ancient egypt.

Although humble paper has replaced gold as the more accessible quilling material, the effect of a finished portrait is surreal, as the raised paper creates shadows and an illusion of depth on the page.

Al Tayeb The portraits are beautiful that way, and that’s why his work is commissioned to celebrate weddings, births, and graduations.

Yet, like many Palestinian artists, his daily practice is hampered by the Israeli occupation and blockade.

Although his tools are basic – a pencil, glue, scissors, paper – the blockade makes it difficult to find the necessary supplies.

“I face many challenges to find the necessary raw materials and equipment, which are very expensive,” said al-Tayeb, 26. “I used to ask my relatives in the Gulf Arab states, like the UAE and Kuwait, to bring me gear.”

More supplies are now available in Gaza, but it is still difficult to find them in the short term, just as it is almost impossible to send work abroad.

“I designed many very beautiful pieces for someone who requested them abroad,” she said.

She arranged for the parts to be transported to customers via a transport company. But the company informed her that the delivery was unsuccessful because Israeli officials destroyed the packages before they left Gaza.

“At that time, I was very frustrated and heartbroken,” she said. “I completely stopped drawing.”

This scenario has repeated itself dozens of times.

“Later, I refused outside requests,” she said. “My talent has become so confined that it is impossible to export the slightest paper portrait abroad.”

Al-Tayeb started drawing when he was 15 years old. She found – and still finds – inspiration in nature and animals.

She discovered quilling online and, with her natural talent for drawing and embroidery, she gave it a try. One of his first quillwork creations was a peacock, which took him nearly six hours to complete.

Since then she has swooped horses, storks and parrots, to name a few. When she completes a piece, she posts images on social media, earning her the reputation of Gaza’s ‘quilling queen’.

“It’s a new art here in Gaza,” she says. “For this reason, I strive to show the principles of this art by teaching it in schools.”

Al-Tayeb graduated from the Islamic University of Gaza in 2018 with a degree in Arabic language. She would have liked to study art, but the faculty of arts is in a “remote area”, she says, and she would have struggled to get there.

For the past two years, she has been teaching quilling in schools in Gaza, to students aged 10 to 17.

When she creates art, she feels she can release all the negative energy she is holding inside, and she hopes her students can also find relief in art, because the attacks of Israel on Gaza makes any sense of calm unattainable.

“There is always hope”

In July 2014, during an Israeli campaign war in the Gaza Strip, all the portraits of al-Tayeb were damaged by a missile strike in the al-Jala neighborhood in the northern Gaza Strip.

Israel used an F-16 fighter jet to bomb a vacant lot next to his family’s home while targeting their neighbors. Residents suffered only minor injuries.

Then, during Israel’s war May 2021 attack, when al-Tayeb was eight months pregnant, missile strikes rocked her at night.

“My family was afraid that I would give birth early,” she said.

Before Israel attacked Gaza last year, al-Tayeb had planned to decorate his baby’s room, but that was postponed until the end of the war.

“When I saw my baby Muhammad in my arms, I burst into tears thinking about the future my child might face in his life,” she said.

Muhammad was born with a heart condition, Hypoplastic Right Heart Syndrome. He underwent open-heart surgery in Israel and is receiving follow-up medical treatment there.

In the midst of all this, al-Tayeb made a portrait of his name in Arabic calligraphy.

This portrait is the first she made after Israel’s 2021 attack on Gaza. After each attack, al-Tayeb always struggles to make art again.

“When I stopped drawing for weeks because of the circumstances of the trip [of Muhammad’s medical care], I got frustrated,” she said. “I’ve always had a strong desire to create new pieces, but I can’t do it anymore. I’m still waiting to get home to draw with great eagerness and passion.

“My little baby gives me enough energy, life and activity to work,” she said.

Al-Tayeb considers herself lucky to be able to pursue art. She thinks it allows her to persist with the hardships of daily life in Gaza.

“There is always hope,” she said.

She is sure that her art will find a wider audience and that one day she will be able to ship her pieces overseas.

“My one simple wish is to get the world’s attention for my art to reach my potential,” she said. “And to find myself in a more appropriate place than where I am now.”

Huda Al Sousi is a writer and translator based in Gaza. Twitter: @HudaSusi33.