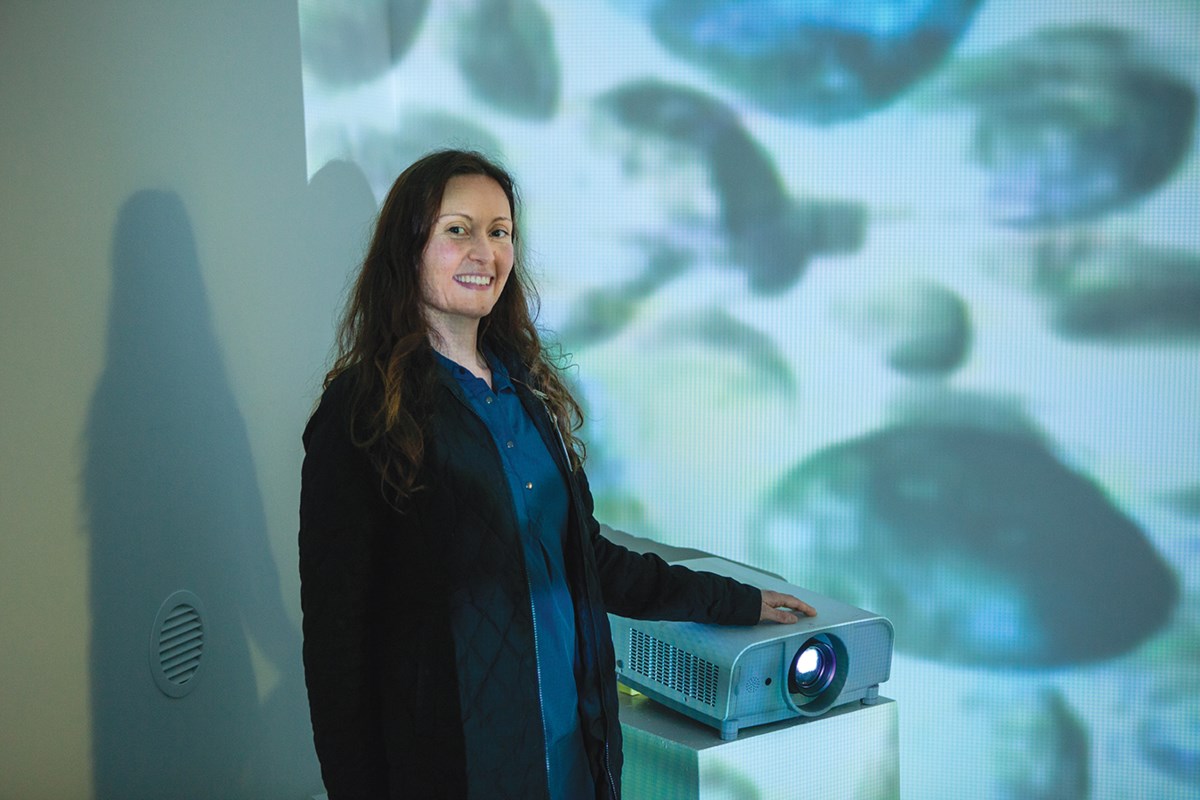 A new exhibition at Gibsons Public Art Gallery takes the gallery in a new direction, as Roberts Creek artist Mieke Jay weaves nature with technology through an immersive three-dimensional installation.

Jay’s exhibition, The Fabric of Our Lives, opened on January 13, transforming the alabaster walls of the gallery into an undulating blaze of color, shape and shadow. Five projectors cast organic backdrops – beaches, woods, water – covered in a latticework of computer-generated patterns.

“Until now, most of our exhibitions have been paintings hanging on the walls,” said gallery director Christina Symons.

While most art exhibitions require patrons to stroll solemnly through corridors lined with paintings, Jay’s exhibition is a dazzling counterpoint to tradition.

Symons saw visitors motionless for minutes as Jay’s illuminations danced around them. A woman, lulled by the accompanying soundscape created by Baeden Shendebray, stretched out her arms and began to dance. Her swinging shadow fell on one of the room’s three trapezoidal columns, adding a human-shaped void to the kaleidoscopic tapestry.

“I have a lot of movement [in the work] and I really wanted it to be uplifting, ”said Jay, reflecting on the pandemic conditions, which required all visitors to the gallery to be vaccinated and masked. “It was a difficult time for people. I really wanted them to be able to have an experience that was outside of our norm. Hopefully this will give people a little creative spurt they can immerse themselves in and hopefully feel a little more optimistic about.

Jay has been creating original projections since graduating from Emily Carr University in 2002. She began designing graphics for live performances and found a way to translate the spontaneity of the audience into her job. “I mix media live in response to what’s happening on stage,” she said. “The musicians follow the crowd and I follow the musicians.”

“At first I was actually working with the fabric itself,” she says, “but the fabric of my own story, which is of European origin. When I got the show at GPAG, I wanted it to be more open and less about me. So I went to images that are more about the metaphorical fabric of our lives here on the coast, which for many of us really revolves around nature. It revolves around everyday things. »

Everyday sounds fill the sonic palette of multi-instrumentalist Baeden Shendebray, also of Roberts Creek, composer of the 25-minute soundtrack to The Fabric of Our Lives. “All the background sounds come from the coast,” said Shendebray, who performs as Goats and Lasers. “It’s just birds, squirrels, waves, wind and rain – tiny little textures. I like to add organic elements to electronic music to make it a little less sterile.

Jay will be streaming a live music and dance program from the exhibit on January 29 at 6 p.m., which can be viewed online at https://fb.me/e/1A37k1v1v. The fabric of our lives remains on display until February 6.

The paper prize encourages artists to push the boundaries