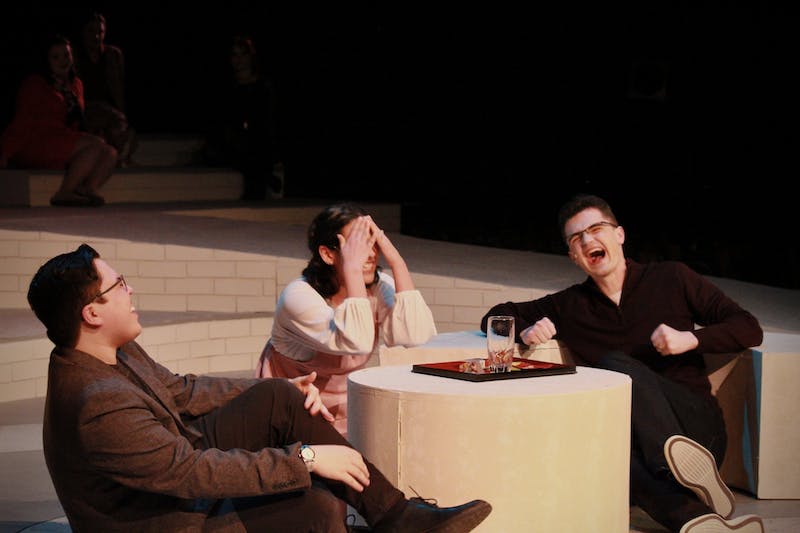 Going out in style: seniors think about “company”

Whether on Broadway or Mago Hunt, ‘Company’ is an ambitious piece. It features 16 distinct musical numbers performed live by the orchestra and an 18-person ensemble. For four UP seniors, this piece will be the last performance of their college careers, before graduating in May and moving on to other projects and, possibly, other milestones.

“It feels like the culmination of four years of learning,” said Madelyn Southard, set designer and senior graduate. “And it’s kind of an opportunity to show that I’ve learned a lot and grown a lot as an artist since I was a first grade baby until today. And it’s been different too , as a senior because I was able to do the big show.

Southard designed a stage that allows for the size and scope of a room as large as this. She was inspired by New York’s public parks as an expression of community space. In service of this, when the characters aren’t directly involved in a scene, they sit at the back of the scene, framing the action.

“A big part of the show is about relationships and connection, and I wanted the actors to have enough space on stage to explore that,” Southard said. “I wanted to build bleachers and levels and stuff so there was enough space for people to just be there.”

The show’s plot centers on Bobby, an eternally single man in his thirties, whose friends are all married. Events unfold in a series of vignettes featuring Bobby and a pair of his friends as they demonstrate the essential complexities of their marriages.

A vignette ends with the couple practicing karate on each other in a way that gets more and more violent as they go on. In another, Bobby discovers that a couple, Susan and Peter, are divorced but are still living together years later, finding this has solved their relationship issues.

Since the cast and crew are mostly single college students, the makers decided to focus the show more on relationships and bonding with friends to make it more accessible.

“From college [student’s] perspective, we really approached it from a community and identity perspective,” said Hannah Harrison, another senior, who plays Jenny. “Where our identities shape the communities we are part of and our communities we are part of shape our identity, and we really wonder who do we want to be around? Why are we in the relationships we are in and not just romantically, but platonically? How are we supported by the people around us? »

This theme resonates particularly well through the songs which feature complex vocal arrangements and are performed by an orchestra conducted by Dr. David De Lyzer. Singing with so many people on stage at once was a challenge, according to Madeline Botsford, who plays Susan.

“Sondheim really went crazy with this one,” Botsford said. “Some of the music just doesn’t make sense when you look at the different parts and how they overlap. The rehearsal process was tough because you have to go through each track and make sure you know your part perfectly because these songs really depend on the singer coming in at exactly the right beat. Even if you feel like you’re going to sing the wrong note, you just have to sing, otherwise it will confuse everyone.

The intricacy of the music is rendered with practical precision from the cast and pit orchestra, with a standout performance from Shae McCarty as Amy. Her lightning-fast vocals on “Getting Married Today” are as anxiety-inducing as they are awe-inspiring to watch live.

The theater department only does one musical every two years. Due to the COVID-19 pandemic, the last musical performed at Mago Hunt was “Pippin” in the spring of 2019. For Botsford, the timing couldn’t have been better.

“This show really feels like a blessing to me,” Botsford said. “Because even though I’m a senior, this will actually be the first fully realized stage show that I’m in. I joined the theater right at the start of COVID, so it’s just perfect timing. I learned most of what I know online and did an online show and then did a staged reading as well. I was super excited to be in [Company] because I hadn’t had that opportunity at UP yet.

This latest show for these seniors has upped the ante for the production, as none of them know what role acting will play in their future careers.

“It’s a big production and the stakes are very high,” Harrison said. “We tend to have a larger audience for musicals. So it really feels like the stakes are higher there too. Then, personally, I don’t know what awaits me in the future, if I will do more theatre. So it’s kind of emotional to say this is my last time on this specific stage with this specific group of people, and then maybe indefinitely.

Despite future uncertainty, they know the big role that theater has played in their college career.

“It really brought me closer to everyone and it really helps me appreciate all the hard work that people put into these shows,” Botsford said. “I’m grateful to be on this last show. And that it’s getting musical too, because musicals are super fun.

Will Mulligan is a reporter for the Beacon. He can be contacted at [email protected]