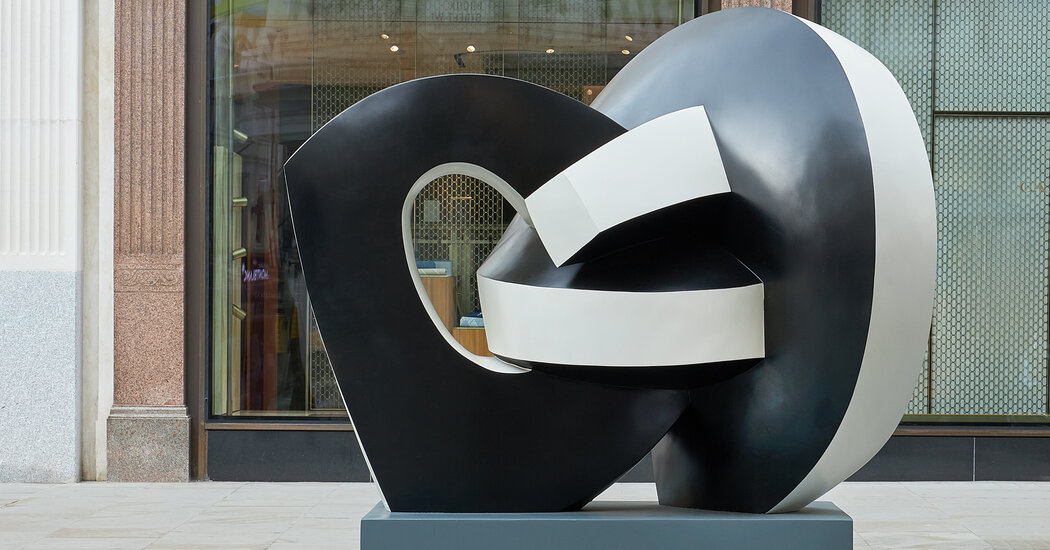 How women made their place in abstract sculpture

A graduate student in sculpture in the 1970s, Maren Hassinger had little affinity for the traditional fibers used in weaving.

â€œI didn’t like weaving with flexible materials,â€ Ms. Hassinger said in a phone interview from New York. â€œOne day, in a dump, I found a wire rope and it changed my career.

“With wire rope, I could make free-standing objects with a strength and linearity that I liked.”

Ms Hassinger is one of nine sculptors featured in an exhibition at the Waddington Custot Gallery in London during Frieze Week. Title “Making It: Women and Abstract Sculpture”, the exhibition addresses the general theme of the contribution of artists to the development of abstraction in modern sculpture.

â€œTwo years ago, we had the idea to show forgotten or ignored women artists in the art world,â€ said StÃ©phane Custot, co-founder of the gallery in an interview from London. â€œWe went in search of artists who had brought something new to the history of art with techniques or materials unusual, even extravagant, for their time.

Inside the sprawling 2,260-square-foot gallery, 22 rooms, some historical or from private collections, showcase the various ways in which these artists, five of whom live, explored the possibilities of sculpture, starting in the 1960s. and 1970.

An additional piece, a black and white bronze abstraction by Sophia Vari of Greek origin titled “Trouble Essentiel”, is on display outside on New Bond Street as part of a public sculpture tour organized by Art in Mayfair and as a teaser for the nearby gallery’s “Making It” exhibit on Cork Street.

â€œIt’s fun to show the sculpture outside because you can see how it changes in natural light and lives with everything that’s going on around it,â€ Mr. Custot said. “It also piques the curiosity of the public to come inside the gallery and see what else we are showing.”

â€œWomen have been overlooked in the larger sculpture narrative, a practice long considered ‘macho’ and dependent on an ability to wrestle with physical material,â€ said Nathalie Rudd, senior curator of the Arts Council Collection, the largest publicly lending collection of British art, speaking of Nottingham, in the north of England.

â€œIt’s interesting to watch artists working in the 1960s and 1970s at a collision of interests, starting with the second wave of feminism, the emergence of postminimalism in sculpture, and the shift from solid blocks to a scale. larger material, created a real opportunity for women to carve out their own space, â€Ms. Rudd said.

A drop on the ground of red and orange polyurethane foam (or molten latex), one of Madame Benglis’ early works entitled â€œUntitledâ€ (1970-71), for example, challenges the verticality of traditional sculpture.

Some artists have used fibers, wood or other everyday materials to make striking objects, applying artisan techniques often associated with the realm of women and domestic service.

An oversized woven tapestry in the show titled “Manto de Greda” (Clay Mantle), made with wool and horsehair using indigenous techniques, is the work of the artist of Colombian origin Olga from Amaral, a figure of post-war Latin American abstraction.

A wood assemblage by Mildred Thompson, an African-American artist from Jacksonville, Florida, reflects her experimentation with the wood found.

â€œFireâ€, a monumental floor-to-ceiling suspension made of sisal, rope and metal, is one of the three large pieces of Barbara Levittoux-Swiderska, an avant-garde artist largely unknown outside of her native Poland.

â€œWhat’s fascinating is the range of these women,â€ Ms. Rudd said, â€œtheir bodily relationship to the work, their physical engagement with the material and the craftsmanship of their pieces.

“There is also a precariousness in their pieces seen in the notion of balance and in the way the works lean or hang.”

â€œI use wire rope because it describes me personally,â€ Ms. Hassinger said. “It’s tough and unyielding, it never falls apart, and I have to fight it to work with it.”

Mrs Hassinger, 74 years old, Director of the Rinehart School of Sculpture at Maryland Institute College of Art, he has been a teacher, performance artist, and sculptor since the 1970s.

â€œAt the time, very few women showed their sculpture,â€ Ms. Hassinger said. â€œI quickly realized that there were many obstacles in my path as a woman and as an African American.

â€œI felt underrated, but I wasn’t hostile about it. I decided that I would continue to do my job even if there was no room to show it. So I made art, I was a teacher and I raised my children.

Institutional validation of her work came when Ms. Hassinger was in her sixties. â€œMoMA was one of the first museums to buy my work three years ago,â€ she said.

In the show “Close to you” at the Massachusetts Museum of Contemporary Art, the piece “Embrace / Love” by Mme Hassinger (2008/2018) shows her range. A wall installation of pink plastic bags filled with human breath, it is on display until January 2022.

â€œToday, public institutions are expanding the historical narrative around sculpture and it is becoming evident that women have contributed so much to this narrative,â€ Ms. Rudd said.

Fueled by the attention of public institutions, the commercial galleries take a new look at women artists like Ms. Hassinger, who had her first solo exhibition at the Susan Inglett Gallery in New York last spring.

â€œI had given up on showing my work,â€ Ms. Hassinger said. â€œSo this year, I was invited to join a gallery.

The show at Waddington Custot may be well timed, but it is undeniably a gamble for Mr. Custot to feature artists without salable name recognition.

“But I consider our work as gallery owners as a complement to the work of institutions,” he said.

“We want to be part of the conversation that museums have started.”

Meet Sven Andrew: The Face of a Freelance Artist in 2021