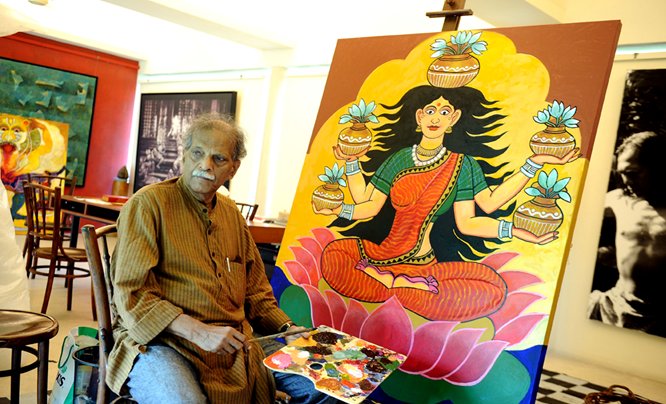 Dinanath Pathy was a giant in the firmament of Indian literary, visual and performing arts. His unpretentious attitude, his ascetic dress and his earthly gait did not, however, betray the immensity of his personality. Only those who had followed his extraordinary work or had the good fortune to know him personally would realize the magnitude of the void his passing has created in India’s artistic landscape.

I had the privilege of knowing him briefly while living in Kuala Lumpur, where he frequently visited the Sutra House. Over the course of two decades, the latter’s founder, Padma Shri Datuk Ramli Ibrahim – a prominent dancer and artistic director of Odissi – and Dr Pathy have collaborated prolifically on a rich and varied array of cultural projects. Datuk Ramli recounted these projects and his loving kinship with Dr. Pathy in a moving piece titled “A Sutra Tribute to a Beacon of Art” which is widely available on the web.

Dr. Pathy was deeply hurt to see the general apathy of Indian society towards art and artists. He complained that the emphasis, if any, on integrating art or art appreciation into our school curricula was just talk. It’s hard to disagree with him. There is so much pressure from parents and teachers on children to focus singularly on textbooks that they grow up believing that art and similar subjects are avoidable distractions.

My own interest in art and culture remained superficial for a long time. A chance meeting with Datuk Ramli and Dr. Pathy, however, changed the situation. Between September 2015 and July 2016, Dr Pathy traveled to Kuala Lumpur a few times as part of the first of Odissi’s two fine co-productions of Sutra – “Ganjam” with Guru Gajendra Panda and “Amorous Delight” with Guru Meera Das. He played a major role in the design of both projects. Each time he visited Malaysia, he brought with him several Indian artists and writers, whom he had taken under his tutelage. Among them were dance critic Leela Venkataraman, painter Ramahari Jena, author and historian Prof. Jatindra Kumar Nayak and visual and graphic artist Jyotiranjan Swain. Dr Pathy had come to dinner with us once, and he had brought as a gift a collection of his literary works, including a book he had co-authored with the famous German art historian, ethnologist and author Padma Shri Dr. Eberhard Fischer.

A few months after Dr Pathy passed away, I met his son Soubhagya Pathy, himself a gifted scholar and writer, in Bhubaneswar. Like his father, Soubhagya Pathy was also very generous with his affection. Knowing my interest in the writings of Dr Pathy, he gave me a collection of fictional and non-fictional works by his father in Odia from their private library. The books were already out of print and therefore very valuable. Two of them – one a biographical anthology of Odia’s pioneer painters and the other a chronicle of Odisha’s theatrical tradition – made a deep impression on me. Both books recount the superiority of the craftsmanship of these artists as well as the enormity of the obstacles they faced in their lives. Many of them lived in misery and died anonymously due to the lack of adequate government and societal sponsorship and support.

Dr. Pathy himself did not achieve the recognition he was due during his lifetime. He had devoted his life to a relentless mission to globalize the art of Odisha. Yet, he remains unknown to a large majority of Odisha’s residents. He has contributed to the construction of many pioneering institutions for the promotion of art and culture. It would be gratifying if these institutions could contribute to the preservation and popularization of his literary and artistic creations in India and abroad.

I have seen a tiny portion of Dr. Pathy’s original drawings and paintings. So I was delighted to see a children’s book in Japanese full of sketches and illustrations by Dr. Pathy at the Asian Library in Osaka. The book, intended to introduce Japanese kindergarten students to Indian rural life, is actually a translation of the original German edition by Dr Pathy, Dr Eberhard Fischer and Barbara Fischer. The text and images of the 32-page book revolve around a child protagonist “Geeta”.

The Asian library has its own interesting history. A short walk from Awaji Station, in a small alley in the Awaji district of Osaka, stands a small two-story house with an unimposing and jaded facade. A row of Ceylon vines hides the wall. The rusted edges and faded paint on the large metal display panel betray its age. The text on it reads Book Land, a jungle of books. Behind this modest exterior hides a giant institution. Established in 1981, the library is the brainchild of the late Professor Sandip Tagore, an academic, painter and musician who lived in Japan for over 60 years. The Indian government awarded him the Pravasi Bharatiya Samman Award in 2017 in recognition of his contribution to the advancement of cultural relations between India and Japan.

Led ably by Sakaguchi Katsuharu, the Asian Library has not only survived over the past 41 years, but has also grown in size, scale and ambition. Today, it houses over 500,000 books in more than 30 Asian languages ​​and offers courses in 33 languages, including Bengali, Hindi, Tamil and Indian Urdu. Its other activities include promoting cultural exchanges between Japan and various other Asian countries. It is remarkable that at a time when public libraries in different countries are disappearing due to declining attendance, the Asian Library is able to sustain its activities through membership subscriptions and voluntary donations. During his lifetime, Professor Tagore organized many cultural events with the support of local and foreign artists to raise funds for the library. Unfortunately, it has stopped now.

The picture book “Geeta” was published in 1983 by another notable institution called Japan Asian Association & Asian Friendship Society (JAFS), which was established 4 years earlier. Based in Osaka, JAFS continues to do outstanding work in the fields of education and the environment in developing countries in Asia and Africa. Several Indian villages have benefited from their philanthropic work.

Dr. Pathy had been to Japan a few times. He had even been the recipient of a scholarship from the Japan Foundation. I have seen his photographs in private albums of some Japanese Odissi representatives living in the Kansai area, many of whom are JAFS members. But it is not certain that he ever visited the Asian library. Mr. Katsuaru, his sole caretaker for all these years, does not remember meeting him.

During our conversation about Dr. Pathy’s work in the fields of art and literature, Mr. Katsuharu asked if the book ‘Geeta’ was available in Odia. He even offered to support its publication or reproduction, if necessary. I promised to check and get back to him about it. Afterwards, it occurred to me that perhaps a more appropriate tribute to Dr. Pathy would be to present his works to the Japanese people in a more appropriate way. It will be my personal mission to work with Dr. Pathy’s family and friends to bring an exhibition of his paintings to Osaka and to have at least one of his books translated into Japanese in the near future.

*The author, an Indian diplomat, hails from Rairangpur in Mayurbhanj district of Odisha. He is currently serving as Consul General of India in Osaka, Japan.

DISCLAIMER: The views expressed in the article are solely those of the author and in no way represent the views of Sambad English.