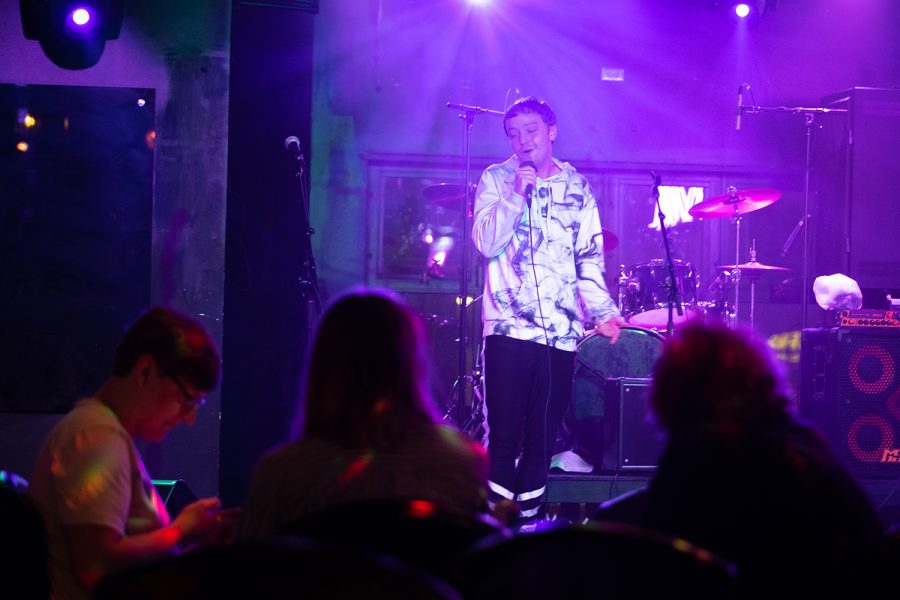 The Iowa City Songwriter Collective provides a space for local singer-songwriters to come and perform at Elray’s Live and Dive, creating a community of artists and viewers.

On a Saturday night, Iowa City is bursting with artistic talent. Saxophone players saturate the streets with singing notes, photographers position themselves to snap photos of new murals and live music floats from the bars.

Weekdays downtown are often not as crowded as weekends. But Monday night, the artistic prowess continues at a particular bar on Iowa Ave. – Elray’s Live and Dive, where a whole conglomerate of local artists can be found performing their wide range of musical styles.

This group of (officially) 30 musicians – plus a number of others that are not officially registered – is known as the Iowa City Songwriters Collective. The group is led by singer-songwriter James Tutson, originally from Iowa.

The collective’s goal is fourfold, he said. The first three seem simple: find local artists to join, make great music, and have fun.

Finding talent and providing a space for them to grow and learn, said Tutson, is the first step.

â€œThe university has 35,000 students, and this is all separate from the number of people living in Iowa City, Coralville, North Liberty or just outside the area,â€ Tutson said. â€œYou’re not going to tell me that there aren’t 100 to 200 really good songwriters in this area with all those thousands of people. But we don’t know if we don’t have the space for them to play and develop and feel they have a community.

The collective exists as a place where all musicians can improve their writing, singing and performing skills, Tutson said. It was created in the hope that people will come to the collective and see amazing music that they never expected.

For Trevor Polk, an indie pop-rock artist who grew up in Cedar Rapids, the collective provides a space he would have loved to have when he was a new musician trying to get off the ground.

â€œIt’s about falling in love with the process, and it allows the artists to share the process together,â€ Polk said. “The fact that this is where people can be there together, hear each other’s stories and feel the energy – the goal is achieved in itself.”

The fourth and last objective of the collective comes from the very existence of the place. Elray’s Live and Dive is based in Nashville, Tennessee, where songwriter nights are very common.

Elray delivers to artists from across the country, but Elray CEO Bret Lanser, affectionately known as “Mr. Elray â€in the Iowa City community – said the company would like to book more local artists each week.

Lanser said he wanted to show Elray’s is the home of live music in Iowa City.

â€œWe can have local artists as forerunners, or if they have bands, we can have them play instead of having a band from out of town. We get that local connection with our community, â€Lanser said. “We want to be able to build this music community here in Iowa City, and we want to be the home for it.”

The Collective has been forming for a year and a half. Bob Franklin, Iowa City Elray’s owner, said he contacted Tutson at the start of the pandemic and asked if he would be interested in playing in his hall.

The offer was put on hold during the pandemic, but eventually Tutson started performing every two weeks at Elray, Franklin said. Soon after, he reached out again and asked Tutson if he’d be interested in helping him host a songwriter night in Iowa City.

Tutson said he pondered the proposal throughout the summer and eventually came to the conclusion that a songwriter night was just what Iowa City needed.

â€œI realized that this is something that could change the landscape of music in Iowa City. In two or three years, this might be something that people know when they come to Iowa City, â€Tutson said. “People would come to Iowa City to see this – even students who might not want to major in music but want to be songwriters would know this thing is happening in Iowa and come here for that reason.”

Currently, the Iowa City Songwriters Collective has two main components: half-hour â€œSong Sessionsâ€ for more established local artists to perform their early or signature works, and â€œCollective Evenings,â€ which are composed of nine to 10 representations. artists of all skill levels who take songwriting and music seriously, Tutson said.

The next collective performance will be a Song Sessions performance on September 27, which is open to the public and will run from 9 p.m. to midnight.

Tutson said the Iowa City Songwriters Collective is hungry for musicians. He pointed out that the level of musicality is not important, musicians can range from new artists writing songs from their dorms to older people looking for an opportunity to get back to playing.

The only important condition for people to join is to be passionate about music, Tutson said.

â€œOur goal is to find as many artists as possible and create a space for them,â€ he said. â€œAny gender, any age, any background, any race, any orientation, whatever. We’re going to bond around music and create a space where we can thrive. “