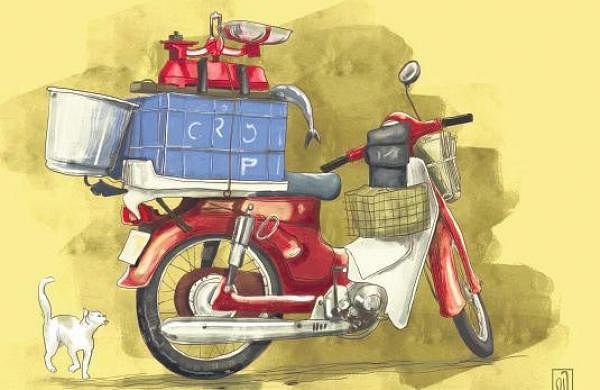 KOCHI: An old man drives a worn, speeding Kinetic Honda. Her floral print dhoti floats in the air. For Vidhumon T, a young illustrator, something as trivial as this is a sight to behold, a framework from which he could weave nostalgic illustrations. His social media series, titled The Local Stories, is about what’s happening in his hometown of Kanjirappally.

The place, a village with its simple lives and innocent faces has always inspired Vidhumon. That is why most of his works reflect the memories of the countryside – the green landscapes and the portraits of lay people. An MFA student at the RLV College of Music and Fine Arts, Thrippunithura, he publishes artwork that comes from the world around him, from his hometown to everything he encounters while traveling the world in his old ambassador’s car.

His keen sense of observation, sense of humor and love for puns make The Local Stories stand out. “I have a certain affinity with my hometown. I make deliberate efforts to draw the people I meet there. The idea came to me one day when I saw Sukumaran, an age-old coconut climber from my area speeding in his worn-out scooter. His lungi was flying through the air. Her laid back demeanor and strong facial features made me want to illustrate a series based on various unique characters around me. Also, it’s a way to represent those simple people who work hard and brighten up our village,” says Vidhumon who was motivated by his teachers and friends to work on the series.

Local Stories is almost a year old now. To make it more accessible to audiences across the country, Vidhumon adds little trivia along with the illustrations. The series has about eight cartoons, and the first of them is his village mechanic – a bald man with glasses holding wrenches under a dim yellow light bulb. Such illustrations expose the quintessence of the labor force in most Malayali villages.

Next comes the handsome cobbler who calmly devotes himself to his job as a cobbler in the shade of a large umbrella. Teahouses occupy a special place in Vidhumon’s illustrations. “I add their subtle mannerisms and expressions to the illustration to make it quirky and add a certain amount of humor. I try to prioritize action or movement to make my frame vibrant. My love for warm colors is reflected in the series. You’ll find a common shade of yellow everywhere,” adds Vidhumon who spends about three days on an illustration.

The illustrator plans to add more stories to his series and wants to release the work as a book or digital episodes. “I believe that the signature of an artist is his individuality. The Local Stories is more like my identity,” says Vidhumon.