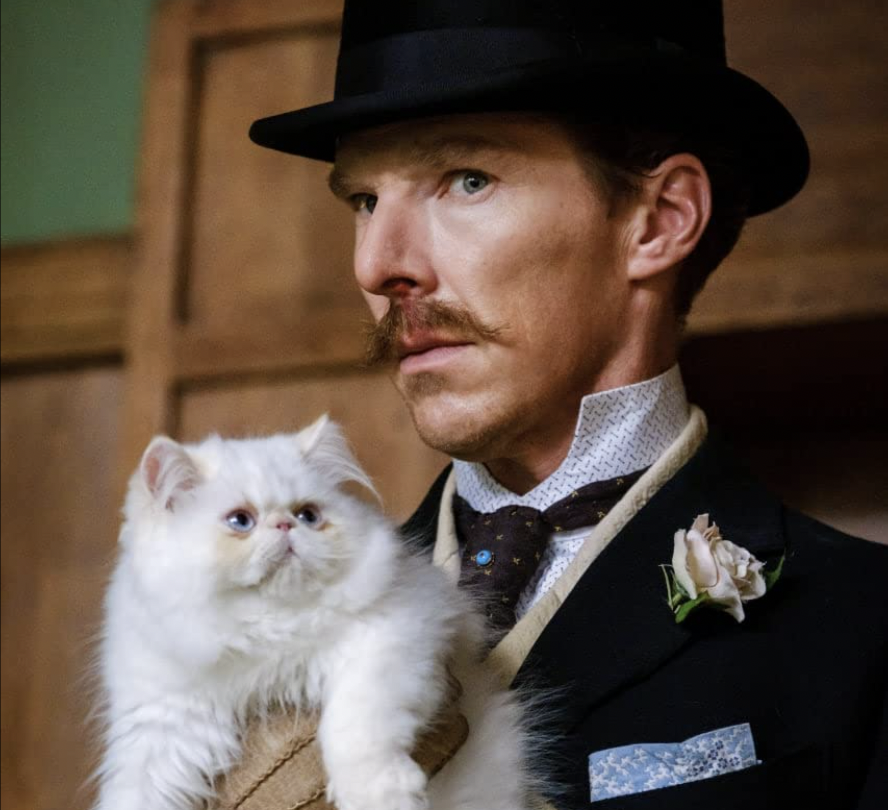 I want to preface this review with a confession: I don’t like cats. Never, never will. I find their eyes scary, their sprays disgusting, and their arrogance irritating.

I suspected this was going to be a problem when I discovered that Will Sharpe’s latest cinematic offering was a biopic by Louis Wain, a Victorian artist who specialized in — you guessed it — cat paintings. Not just any cat paintings either, but obsessively detailed, anthropomorphized cat paintings that walk the fine line between eccentric and ridiculous.

It’s clear why Sharpe is drawn to this subject. The Electric Life of Louis Wain follows the titular artist (Benedict Cumberbatch) through the years, spanning his young adulthood as an aspiring illustrator and inventor trying to support his large family, to his final years as a reclusive patient in a psychiatric hospital. His hesitant and unhappy romance with Emily de Claire Foy, his younger sisters’ eldest governess, sets off a series of events that will cement his status as a creative visionary, but will also result in the breakdown of his relationships, and ultimately his sanity.

Sharpe’s work has always been about the intersection of creativity and mental illness, and this film is no different. Both painfully anxious and highly talented, Wain lacks any business acumen that could improve his financial situation. Prolonged nightmarish sequences of shipwrecks and drownings repeat over a soaring score, interwoven with the tale of his gradual descent into poverty. It’s torture to watch, especially because it feels so avoidable.

The fundamental flaw of The Electric Life of Louis Wain is that once these events begin to occur, their catastrophic consequences multiply, growing larger and larger, until even the film’s cutesy message – “Electricity is love !” – can outweigh their depressing weight on the narrative.

Despite this, The Electric Life of Louis Wain is undeniably beautiful. It is found at its best in the dreamy, pastel depiction of a new love at the start of the film, and in the quiet, understated humor of the Wain family interactions. Often particular shots stop and swirl delicately, the lines of the character figures bleeding into each other like an oil paint.

The dynamic between Foy and Cumberbatch is also both subtle and sweet. Both actors do what they do best: Claire Foy plays the Queen if she was a Victorian governess, and Benedict Cumberbatch plays Sherlock if he could draw. Their good, reliable performance isn’t that impressive, but is still nice to look at.

To be honest, I expected to fall in love with The Electric Life of Louis Wain the way I fell in love with other works by Will Sharpe. He didn’t earn the same place in my heart as flowers (2016-18), and I still don’t like cats, but I can appreciate them a bit more after watching this movie.

Did you find Louis Wain as electric as his art?