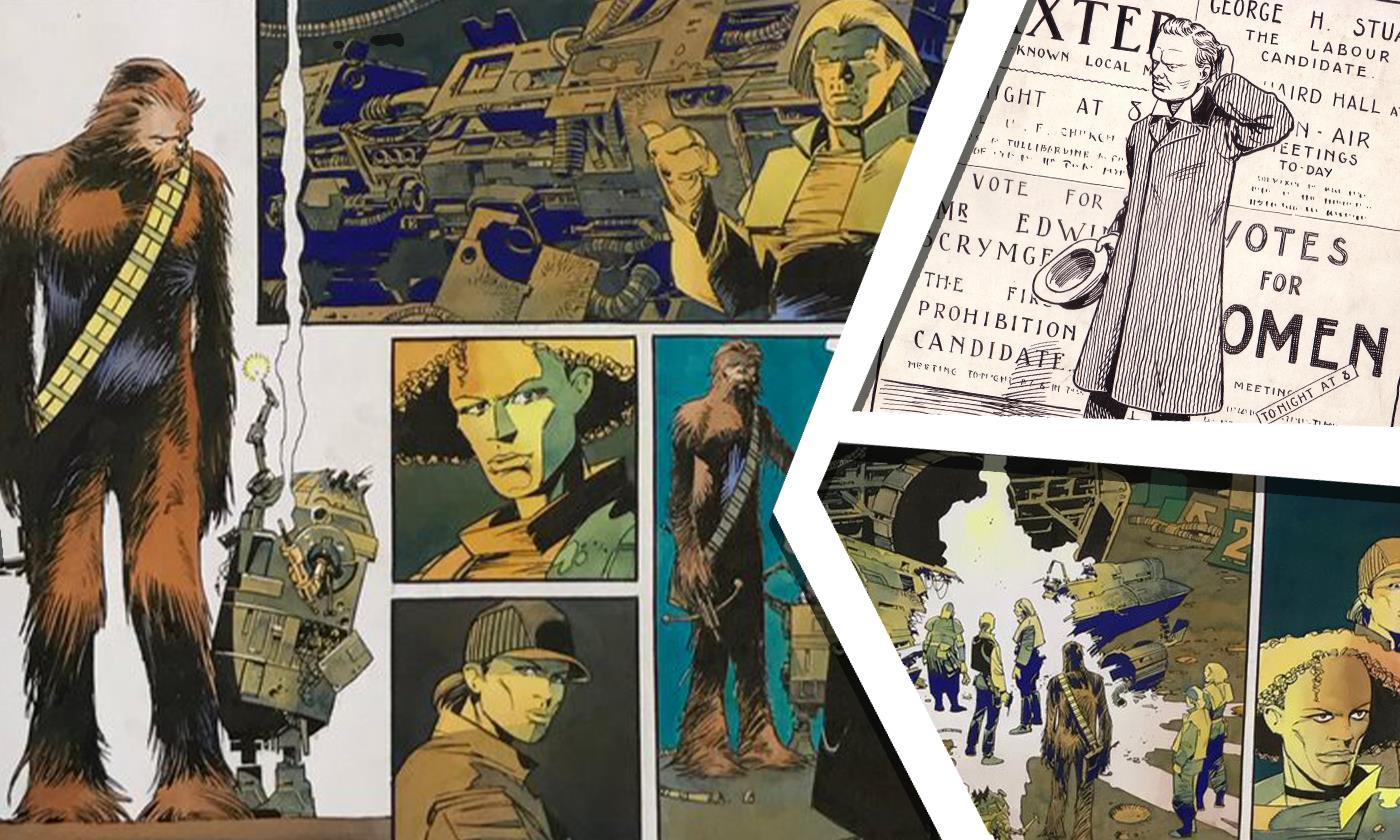 Original comics including Star Wars and Guardians of the Galaxy are among the highlights of a new exhibition in Dundee.

Fans can flock from a galaxy far, far away to the Tower Foyer Gallery at the University of Dundee to see some of the latest additions to its collections.

These include a full-page Star Wars comic by master illustrator Cam Kennedy, whose early work was the Commando comics he drew in the 1960s and 1970s.

He also illustrated Empire 7 and the covers of Classic Star Wars: The Empire Strikes Back 2, Jabba the Hutt: The Gaar Suppoon Hit and Star Wars Tales 18.

Star Wars comics have been produced by various publishers since the first film hit the big screen in 1977 in a blaster fire.

Kennedy joined the Star Wars team in the 1990s and is also known for his work with Judge Dredd co-creator John Wagner on Outcasts and Batman for DC Comics.

The university has over 33,000 objects, works of art and specimens which are cared for by curator Matthew Jarron as a public museum service.

The Recent Acquisitions exhibit focuses on showcasing recent discoveries that the university has added to its museum collections.

Matthew said: “Thanks to DC Thomson, Dundee is of course one of the most notable centers of comic book production, so it’s fitting that we celebrate this amazing art form.

“We are also showing in the exhibition a wonderful political cartoon created for The Courier by Frank Coutts, a staff artist who also studied at the art school.

“It shows Winston Churchill arriving in Dundee for his first political campaign here in 1908.

“Coutts then created many more caricatures of Churchill, who was an increasingly unpopular MP for Dundee until 1922.”

Matthew said other notable artworks in the exhibit included several objects that have been used by the university to make groundbreaking discoveries.

“Our collections keep growing and items come to us in a variety of ways,” he said.

“A lot of them come from the university itself – a department is going to do a vacuum and find some interesting artifacts hidden away in a closet somewhere.

“An interesting example of this is the first laptop featured in the exhibit.

“The Epsom HX-20 was released in 1982 and was the first portable computer.

“Ours was used by the famous physicist Peter Le Comber.

“His work on amorphous silicon with Walter Spear – which began in the 1970s – was instrumental in the development of liquid crystal displays for use in flat panel televisions, solar panels – and computers laptops!”

Many objects in the university’s collections are donations, including 100 design pieces created by Kathleen Butlin who studied at Dundee College of Art in the 1950s.

She graduated in 1954 with a degree in design.

Along with fellow graduate Moira Macgregor, who would later become a famous fashion illustrator, she received a travel grant which took them to Paris, Rome, Florence, Venice and Milan.

She then worked in the commercial design industry, creating eye-catching designs for a wide range of products, including tourist guides, cookie boxes, popsicles, plum pudding and even dried peas.

Matthew said: “Another unique gift came to us in 2021 from the famous pioneer of minimal access or keyhole surgery, Professor Sir Alfred Cuschieri, who first came to Dundee as a professor of surgery at Ninewells Medical School in 1976.

“It’s actually a bronze cast of his hands, made in art school when he retired in 2003.

“He later returned as Senior Scientific Advisor at the Ninewells Institute of Medical Science and Technology, a role he still holds today.”

Matthew said some gifts might not seem very exciting at first, but a little research often reveals a fascinating story behind them.

“This pair of pince-nez belonged (according to the name on the case they came in) to a Dr Robert Miller of the Dundee Eye Dispensary, 80 Nethergate,” he said.

“There was a Dundee Eye Institute at 86 Nethergate, which later moved to 136 and survived until the 1980s.

“At first we thought they must be in the same place, but one of our volunteers looked into it and found that Miller seemed to have set up his dispensary in direct competition with the institute, and often got into trouble for stealing from his patients.

“He also regularly dragged his own patients to debtors’ court for non-payment of their bills.

“He always conducted his own business and visitors to the court could be assured of ‘good entertainment’ when he was there!”

“The glasses were found at a car boot sale in the United States where someone bought them and sent them to us for the medical history museum.”

Matthew added that the university also tries to purchase items from the annual degree shows to support and promote its students.

He said, “We have included several examples in the exhibit, including illustration, printmaking, textiles and jewelry.

“One of my favorites is a digital print by illustration student Jurgita Vasiliauskaite.

“Since graduating, Jurgita’s work has been seen in various locations around Dundee, including one of Lochee’s new murals.”

The university exhibition is held in the Tower Foyer Gallery Monday to Friday from 9.30am to 7pm until April 1.

My Old School: Story of a schoolboy impostor who was exhibited in Dundee to be screened at Sundance

On My Radar: Cultural Highlights from Mark Oliver Everett | Eels