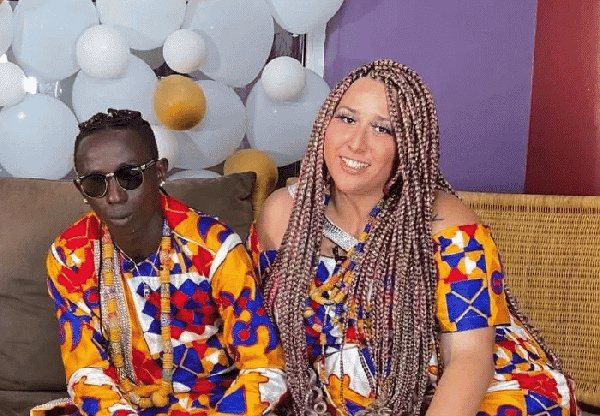 Patapaa apologizes to Zionfelix after a terrible night

“No Woman No Cry” covered by Bob Marley seems to have been adopted by Patapaa in his last message which contained an apology to Zionfelix. For the Ghanaian musician, “No wife, no problem” and so although he fought the blogger for allegedly causing the marital hiccups, he unreservedly apologizes.

“Zion, if I said anything bad between you and my wife, I’m sorry…I won’t talk about you and women again…Last night was very bad, no women, no problem,” Patapaa wrote on his WhatsApp status.

The musician had in several interviews with the media accused the blogger of being interested in his wife, Liha Miller. The basis of Patapaa’s argument was that after rumors swirled that the marriage of less than two years had hit rock bottom, the blogger rushed on a plane in German to ask his wife about the matter, although the rumors are false.

Zionfelix had shared a video clip of himself and Liha on Instagram as he anticipated the interview. Unlike the blogger’s followers, Patapaa was irritated as he fumed in rage, GhanaWeb observed.

“It’s because of this guy that I don’t want to see my wife again. He’s the problem between my wife and me… I don’t want to talk now but it’s time for me to talk. Everyone should watch out for this guy, who calls himself a blogger. He is the one causing problems in my family,” Patapaa said.

The Swedru-based musician’s remarks sparked a backlash from Zionfelix who noted he couldn’t be blamed for any incidents between the pair, pointing out he only went to interview her.

“I have nothing to do with women. I don’t know what’s going on between him and his wife. I’m just a celebrity and lifestyle blogger. I also do interviews and I went to the woman to interview her like I did a lot of other people,” he said in a video with the caption, “He should leave me out. I just went to interview him and that was it. Patapaa should solve his problems and leave me behind.

Either way, Patapaa’s fury would not be extinguished. He called Zionfelix a “homonizer” [Womaniser] and went ahead to release a diss song for the blogger.

A day after releasing the song, Patapaa apologized to Zionfelix saying “it’s not because of a woman that my life will be short”. He swore never to talk about Zionfelix and Liha again.

When the divorce speculation started, Patapaa denied the rumors on Kastle FM claiming that they were still husband and wife.

“You know my wife is a white woman from Europe but not permanently based in Ghana plus she is a nurse. So she went back to earn more money abroad and I also make money here in Ghana that’s why you don’t see her these days,” he said in the interview.

Liha, also mentioned in her interview with Zionfelix that there was not an iota of truth in the rumors. In fact, she mentioned that she misses Patapaa because of his joviality. Shocked by the rumours, Liha mentioned that it may have been fueled by her decision to return to her home country of Germany. She noted that the decision to move to Germany had been carefully considered adding that there was a consensus.

“He can’t come and sit with me to work together in the hospital, he’s not a nurse. I understand that and I respect his work because we talked about it at the beginning that he would still continue to make his music,” she noted.

While admitting that every marriage has its own issues and theirs is no exception, Liha, whose decision not to wear her ring has contributed to speculation, said, “The fact that I don’t always wear my ring does not mean that we are divorced and even if our marriage is troubled, no one has the right to talk about it and make recommendations to us, except ourselves and our parents.

Watch the latest episode of the Bloggers Forum below.