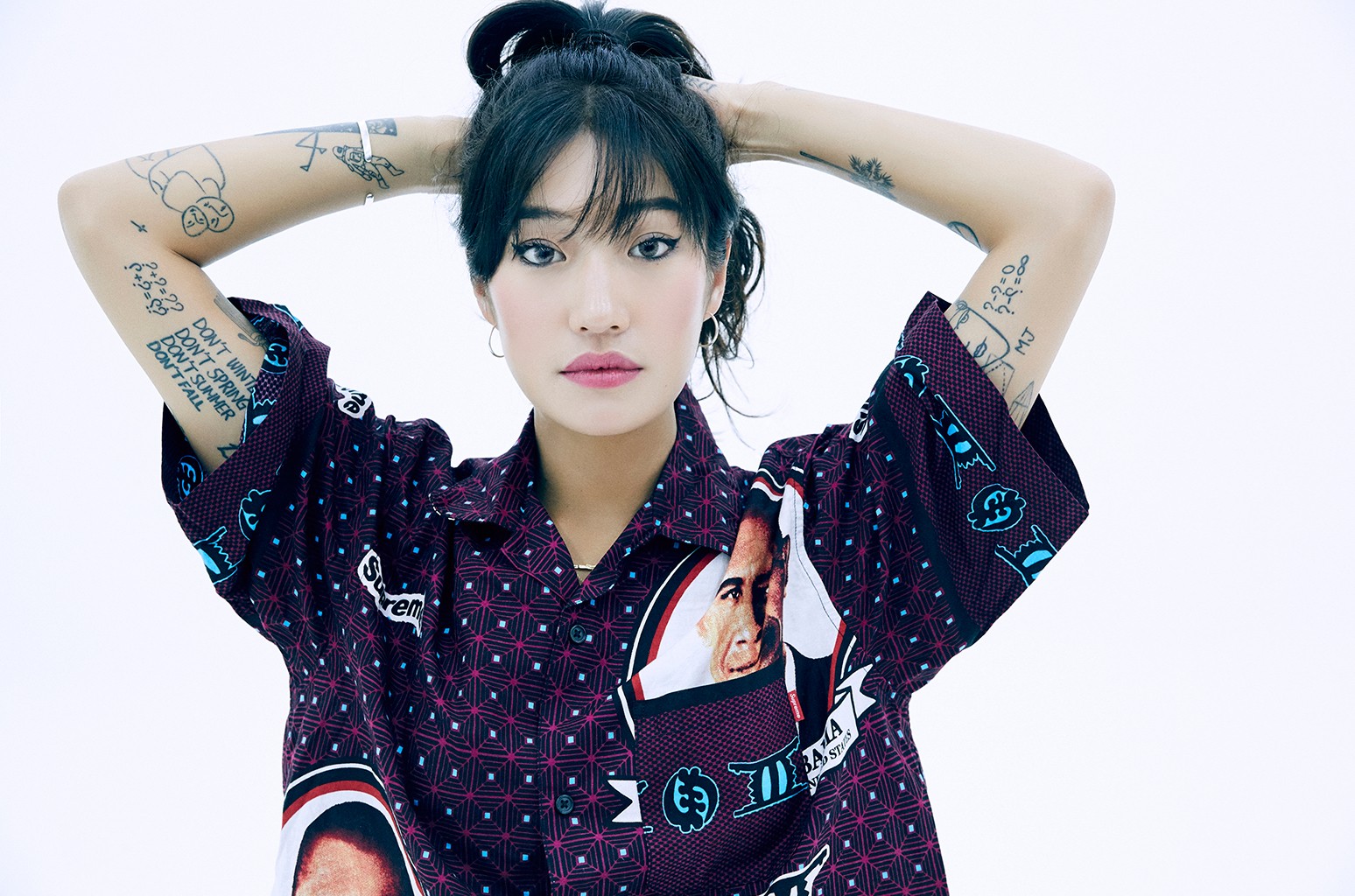 After balancing our collective anxiety last month with the downtempo ballad “Nabi”, Peggy Gou brings us back to the dance floor with her new track “I Go”. Despite his relatively short tenure in the dance world, Gou is emerging as a perennial summer banger-bringer, with hits such as “It Makes You Forget (Itgehane)” from 2018 and “Starry Night” from 2019. already in his pocket. (Last summer doesn’t count, for obvious reasons.)

A ready successor, “I Go” is a sparkling dancefloor fantasy rendered in pink and lilac pastels, with Gou’s vocals over trance-tinged melodies, a quivering acid synth line and a scorching whistle that evokes images of seagulls. hovering along the coast and endless horizons – images of freedom and possibility. In a statement, Gou shares that the track is an homage and reimagining of the British rave culture and sounds that she admired from afar as a teenager in Korea. “The lyrics are based on a note I wrote on my phone in 2019, looking at myself in the mirror of an airport toilet – I looked so exhausted but there was no way I could do not continue! she writes. “’I Go’ is basically me who motivates me, I find courage and I return to a feeling of innocence. Hope people get the same feeling of positivity when they hear it. – KRYSTAL RODRIGUEZ

It’s officially summer, and we all need a hot villain anthem to strike as we face these rising temperatures. Fortunately, Icona Pop has teamed up with German electro duo Vize on a future gritty little bop house called “Off Of My Mind”. It’s sweet, groovy, and a little dirty, that’s exactly what we’re looking for on a summer night out on the dance floor.

“We’re always excited to release new music, especially in these times,” the ladies of Icona Pop said in a joint statement. “We’ve been locked in the studio working on a new album for what seems like an eternity. We’re very excited to be working with Vize on this topic and can’t wait to start playing live again and sharing all of our new music.

“It was a pleasure to work on this song with the girls of Icona Pop,” adds Vize. “Even though we unfortunately didn’t have the chance to meet in person, we just can’t wait to play it on stage. A unique atmosphere and the vocals are so on point. We’re really happy that this song is finally seeing it. the light. KAT BEIN

Joseph Ray de Nero and the Haitian musical collective Lakou Mizik release their third track, “Bade Zile”. The collaboration began when Ray arrived in Haiti in 2015 as a volunteer teacher at the country’s only music production and audio engineering school, the Artist’s Institute. He stumbled across a performance by Lakou Mizik at a small club on the beach and the seeds for this collaboration were sown. Both cheerful and possessed of tremendous depth, “Bade Zile” is a traditional voodoo spiritual song fitted with traditional Haitian drums and chants, and in Ray’s hands, also a quivering digital production. The song is ahead of Lakou Mizik and Ray’s collaborative LP Leave the bones, released on August 6. – KATIE BATH

Amtrac, “Support for the outdoor station”

Step into the smooth furrows of deep space and immerse yourself in the dark blue and purple hues of the relaxed yet eerie ambience of Amtrac “Outer Station Support”. With an awe-inspiring seven minutes, it ascends and descends through rolling hills of synth bliss, slowly breathing through expansive string chords and gently bubbling over to a steady house rhythm. It’s absolutely delicious, and it’s the first single from an upcoming EP called MIDI ceremony.

“Over the past year or so, I have delved deeply into dub techno vinyl,” the artist writes on IG. “I became obsessed with the simplicity of only using a few pieces of equipment to create. This EP materialized through unique takes, recorded live on an MPC2000. Look for him on his Openers label later this year. – K. Bein

박혜진 Park Hye Jin’s music is well suited for listening at home, but even South Korean producer-turned-Angeleno couldn’t have predicted that home would be the only place people could listen to his music for an entire year. . On songs like Dance billboard prefer Park’s “Like This” music exists somewhere between deep house and hip-hop, between the club and the couch. His new single, “Let’s Sing Let’s Dance”, just as relaxed, sounds like an invitation to venture outside. The warm piano keys drift over the song’s sweet house rhythm like fluffy clouds in a blue sky; the “sunny days” Park talks about seem both literal and metaphorical, a cause for community celebration. “Close your eyes, you hold my hand,” she sings in Korean in a soothing, almost whisper. “You can smell it even though you can’t see it.” “Let’s Sing Let’s Dance” is the lead single and the opening track from 박혜진 Park Hye Jin’s debut album Before i die, which releases September 10 on Ninja Tune. – KR

For a panoramic view of the next wave of dance music, check out Space Yacht. Initially a weekly party, the Los Angeles-based collective spent their pandemic-induced downtime exploring a new frontier in A&R, inevitably launching their eponymous label last October. Since then, the label has recruited many of its performers from Space Yacht’s Twitch-based demo showcase, “Tune Reactor.” After having published the first opus of their Technology my home compilation in january, part two is here with a new roster of young talent including Arnold & Lane, Chapter & Verse, Capozzi and No Thanks & San Pacho. Tech house is promised, and it’s delivered in its entirety on 14 tracks brimming with heavy bass, boxed grooves, and sounds designed to stimulate your brain waves at 3 a.m. Few of the tracks here, however, create an instant summer like “When in Miami” by Swavé, Hitta and Vanilla Ace. This LA-London team brings a sun-drenched, sweat-drenched rhythm, with euphoric horns and percussion that roll with the hips. The screaming and screaming vocal samples add a feeling of feeling like you’re in the middle of the dance floor at a daytime party – subtle yet endearing, and sorely missed. – KR

Hey, do you like sick pop melodies mixed with hooks out of left field? Do you like your electronic music to be a little sweet and a little spicy? Ninajirachi’s “Dracodraco” is the mind-blowing sugar effect your body craves. It starts off all cute and cuddly, then hits you with whiplash textures and hard bangs – and it does it all without losing sight of its pastel pink melody. “Dracodraco” is just one track from a two-track EP of the same name. Definitely give “Stoneteller” a spin on the B side. It’s a real funky bass shock that shouldn’t be missed. The full two-label release was released via Nina Las Vegas’ NLV Records and is also the artist’s premiere on RL Grime’s Sable Valley, but we wouldn’t be surprised if there was more to come soon on that imprint. – K. Bein

Flight Facilities’ latest single gets a dark, catchy remix from German heavyweight Gerd Janson, who rejects the electro elements on the Australian duo’s (utterly excellent) original and cranks up the siren synth and BPM, creating a sound urgent, hypnotic (and seven minutes!) edit for a remix package that also includes a take from London underground hero ABSOLUTE. “In 2017, we slipped an unknown lead into our Boiler Room show,” the gentlemen of Flight Facilities said in a joint statement. Needless to say, we were blown away by the number of questions that were asked afterwards. ‘The Ghost’ was born and quickly became a staple in all of our shows. Who could we trust to remix such Song you ask? None other than the greats Gerd Janson and ABSOLUTE. We’ve been fans of Gerd’s label and DJ sets for years, so it’s a huge honor to see him turn the track into a disco track Absolute has been on fire lately, his mixtape at the start of the year was reason enough to ask him to remix this one, it’s one of the best of 2021. Janson adds: “That would have been a sacrilege. not to remix ‘The Ghost’. The Flight Facilities original has an almost irresistible vocoding vocal hook that sounded perfect for a dance floor rod. It just needed a kick-snare and a choir…and There you go! “- K. Bath