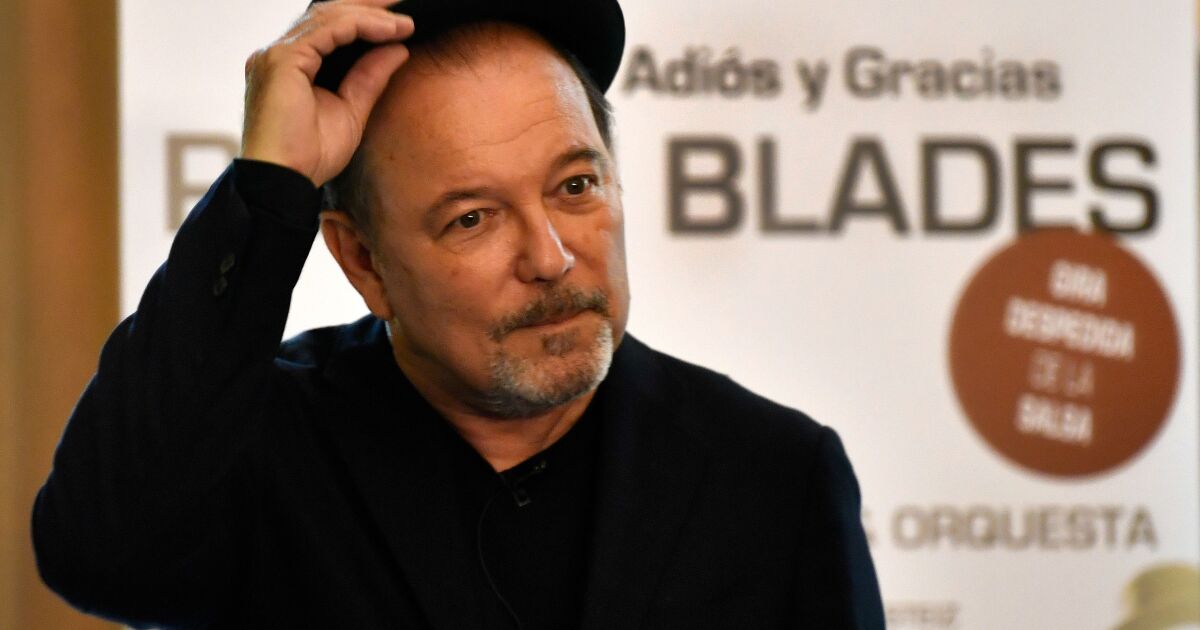 RubÃ©n Blades and the Orquesta by Roberto Delgado

The legend of salsa music RubÃ©n Blades has a moment – many moments, in fact – four years after the conclusion of his farewell tour â€œCaminando, adiÃ³s y graciasâ€ (â€œWalk, goodbye and thank youâ€).

This isn’t too surprising, however, given that this 17 Grammy and Latin Grammy Award winner had vowed to continue his career but not film again after his farewell trip.

In fact, in 2018, New York-based Blades decided he had left the road too quickly and announced his return to the concert stages. Had it not been for the shutdown of live events fueled by the COVID-19 pandemic, he would have toured last summer with the great jazz keyboardist Chick Corea (died February 9).

This year, Blades is also ending his five-year tenure as the co-star of the popular “Fear the Walking Dead” television series. A graduate of Harvard International Law School, he served as Panama’s tourism minister from 2004 to 2009, after an unsuccessful presidential race in his native country in 1994. (He won 17% of the vote.)

Always keen to broaden his artistic horizons, Blades, 72, moves freely in two directions at once on his latest album, “Salswing”. He teams up with the 13 musicians Roberto Delgado Orquesta, a 25-year-old big band led by its namesake bassist.

They are augmented on this 11-song album by 15 guest musicians. Together, they ably help Blades in its marriage of old-fashioned salsa and jazz swing classics from the Great American Songbook. It’s a natural, if not common, juxtaposition, and part of his quest to present different styles and cultures in what he calls a musical â€œmixturaâ€.

Blades points this out in the sleeve notes of â€œSalswing!â€, Writing: â€œAll albums today are limited to a specific musical direction to fill a specific market niche. It’s an economic imperative, not an artistic one. .I’m doing it with a Panamanian band because I wanted them to broaden their horizons – and I also wanted to prove the fact that music can be made by people not necessarily because they were born in a country or because they are a certain race or nationality, but as long as you have a mind that demands it, music can be produced anywhere in the world by anyone.

One of its objectives, he also notes, is “to eliminate the stereotype which asserts that we are conditioned to exist artistically only within specific limits according to our nationality”. For good measure, he adds, â€œWhen people ask me what kind of musician I am, I just look at them. When they ask me what I play, my answer is: music!

This line-blurring philosophy is particularly apt for Blades. The second of five children of a Panama City police officer, he became addicted to music as a child after hearing records from New York doo-wop stars Frankie Lymon & The Teenagers. His previous musical collaborators range from salsa greats and jazz trumpeter Wynton Marsalis to Bob Dylan, Lou Reed and Sting.

It opens with a brassy reinvention of Blades’ 1978 hit “Paula C” and ends with the lively “TambÃ³”, which he wrote in 1977 and first recorded a year later with the star. of salsa trombone and conductor Willie Colon. Their 1978 joint recording, “Siembra”, is the most popular album in salsa history, with over 3 million copies sold worldwide.

â€œSalswing! Has nine other songs that you wouldn’t expect to find all on the same album. They include a lively rendition of Tito Puente’s “Mambo Gil” and readings inspired by jazz standards such as the exuberant “Watch What Happens” and the so svelte “The Way You Look Tonight” (which features lush textures by the Venezuela String Recording Ensemble).

Blades’ soft vocals on “Happens” and “Tonight” suggest that he is familiar with Frank Sinatra’s recordings of both songs, as is his sufficiently playful version of “Pennies from Heaven”. The expertise that he and Delgado’s band demonstrate with salsa and big band swing is as undeniable as the passion they exude throughout the album, not more than with their appeal and contagious voice on the “TambÃ³” on percussions.

What makes “Salswing!” especially pleasing is the way Blades and his co-workers skillfully switch from salsa to jazz and from Spanish to English. Or, as Blades told me in an interview with the Union-Tribune in 1987: â€œThere is no language barrier at my concerts.

You want to know more ?

If there’s a more accomplished, empathetic, and versatile all-instrumental trio in rock than The Aristocrats, I haven’t heard them yet. Ditto for a trio that knows so skillfully how to blend heavy metal thunder, jazz finesse, fiery country-music, bluesy momentum and progressive rock bravery, with touches of rockabilly and surf-rock for more seasoning.

Together, English guitarist Guthrie Govan, American bassist Bryan Beller and German drummer Marco Minnemann – a resident of Lake Elsinore – perform with ever impressive skill, daring and (too rare in rock).

Their new album, â€œFREEZE! Live in Europeâ€, showcases the band’s dazzling virtuosity and improvisational ingenuity from start to finish, but never goes down into a vacuum, â€œLook at me! is a notable achievement, and only a few rock musicians so accomplished can resist the temptation to exhibit themselves at length.

What makes the band so special is their extreme precision, their mastery of the dynamics from whisper to scream and the sharp sensitivity that each member displays when playing together. This is true even when Govan, Beller and Minnemman indulge in the musical equivalent of daring feats without a net, which is often the case.

These attributes were brought to light during the Aristocrats’ breathtaking concerts at venues as disparate as UC San Diego’s Price Center East Ballroom, the Bay Park Club Brick by Brick, and Ramona Mainstage. As a bonus, the trio’s 2012 debut here at Brick By Brick saw Govan take on a special guest, the great San Diego guitarist Mike Keneally, who recorded and toured with Beller and Minnemann in his own band. . and with guitar star Joe Satriani.

Govan, Beller, and Minnemann all have several solo albums under their belt, while their individual credits range from film composer Hans Zimmer and Buddy Rich Big Band to Lil Wayne and Asia. But the three shine the most as a collective unit and â€œFREEZE! Live in Europe â€is the intoxicating climax of the Aristocrats’ first decade together as a group.

It was recorded in three Spanish cities – Bilbao, Seville and Murcia – in February 2020, just weeks before the COVID-19 pandemic caused a global halt to live events.

Five of the six selections are taken from the group’s fourth studio album, the daring “You Know What …?” The first three appear in the same order on â€œFREEZE! like on “You know what …?” – the fierce “D Grade F — Movie Jam”, the flamenco-tinged “Spanish Eddie” and the “When We All Come Together” (which slyly quotes “She’ll Be Comin ‘Round the Mountain”, a song featured in a 1936 Gene Autry cowboy film, and finds Govan chicken plucking brilliantly).

All three acts take on new life on stage. The same goes for the atmosphere “The Ballad of Bonnie and Clyde” and the closing of the album “Last Orders”, which finds the group immersed with sensitivity in the blues, entering a flexible swing rhythm then concluding so gently. that it almost sounds like Govan and Beller have turned off their amplifiers.

The longest track, “Get It Like That”, is dedicated to Rush drummer Neil Peart, who died on the Aristocrats European tour 2020. It presents a long excursion of unaccompanied percussion by Minnemann, whose solo is so well conceived and performed that it could have been noted and arranged note for note.

That he was created, like everything â€œFREEZE!â€, On stage right now, says a lot. So too are the Aristocrats, who – at their best – redefine the range and depth of rock power-trios. In their hands, the bar for such groups has been set higher than ever.