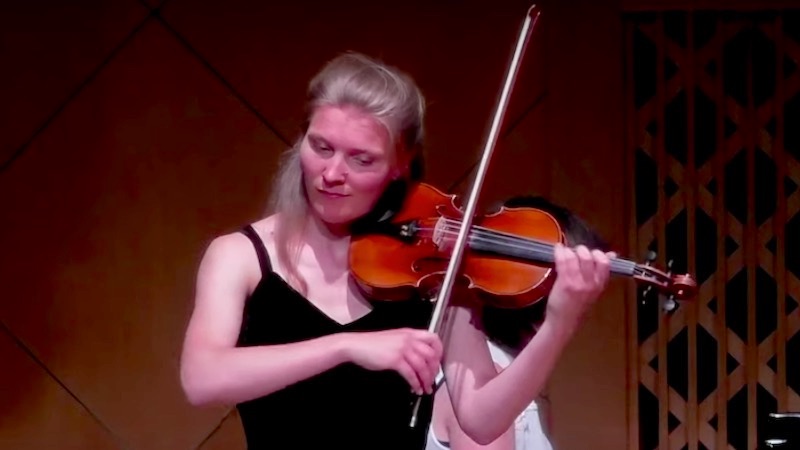 August 21, 2021, 8:29 PM On Saturday, the semi-finals continued as part of the 2020 Shanghai International Isaac Stern Virtual Violin Competition, with seven more performances of Mozart’s Violin Concerto No.4 in D major, K. 218, with original cadenzas by the competitors.

The finalists will be announced tonight, with the finals taking place next year, 2022, in Shanghai.

William Lee from Taiwan doesn’t just play, he performs, and his Mozart is no exception, with a good-natured and inviting approach. His articulation was right on target in the first movement, with a cadence that had nice frills and challenges, like cadence should. The second movement showed its lovely singing tone, and the third movement had both sparkle and precision.

Ruifeng Lin from China won me over with his first movement cadence, which struck a fine balance between communicating his ideas with the listener but also serving to demonstrate virtuosity and skill. Lin has light fingers and the violin teacher in me enjoyed how much he picks them up when playing trills. For his second movement cadence, he started by playing the theme in harmonics, then in double-playing harmonics and also included beautiful harmonizations of utterances and responses.

German violinist Felicitas Schiffner delivered a sophisticated and satisfying interpretation of Mozart, with great attention to dynamics, graduated crescendos, contrast and a veritable variety of musical textures. Her cadences really sounded like improvisation – an accomplished musician playing with ideas and deciding what to do in the moment. There was a good variety of key exploration and he had a quiet nature, while still giving us lots of quick notes and virtuosity. The slow motion was never terribly “slow” as it had constant direction, and its cadence here was smart, with a sense of inevitability. The third movement had bounce and confidence, with the three short cadences kind of a matching set, using the same idea taken in different places.

KayCee Galano from the Philippines took a set of slightly slower tempos for the three Mozart movements. She played with a beautiful sunny tone, with a direct approach and great technique. Its dual-set vibrato is downright enviable. Her performance was a little cautious – it would have been okay for her to hit the gas and leave tempo boundaries in the dust on occasion, as her high level of technique would certainly back it up.

Charlie Lovell-Jones from the UK has picked up a fast pace throughout, showing absolute commitment and also a bit of an experimental bent. Some notes, even the end notes, did not have vibrato. It is certainly a legitimate idea in a classical work and which widens the possibilities of expression, but it has turned out to be a little incoherent. Still, I really enjoyed the notes where he did what I would call a “crescendo vibrato” – starting a note with a cool nothing-vibrato, then warming it up with a vibrato that widens to the top. end. His cadence of the first movement took all kinds of unexpected turns, using both harmonic and interesting virtuoso ideas. The second movement was a brisk but determined walk (Andante) and the third movement was quite fast, with cadences that kind of “crept in” – very smart in the way they fit into the movement.

Angela Sin Ying Chan from Hong Kong plays with a very full and appealing violin sound, and her intonation is so satisfying. His pace started with gentle double stops and then grew more powerful. His cadences had highs and lows, creating suspense and then running through it. His second movement had well-formed sentences and the third movement was very precise and well articulated.

The session ended with a very energetic yet elegant Mozart 4 by Shannon Lee from the United States, who really knows what she is doing. Her Mozart playing is both strong and light – not an easy balance to find, but she does, and it’s a very enjoyable performance. Its cadence of the first movement also served the music, with double stops that harmonize the melody, as in Bach. Nicely composed.