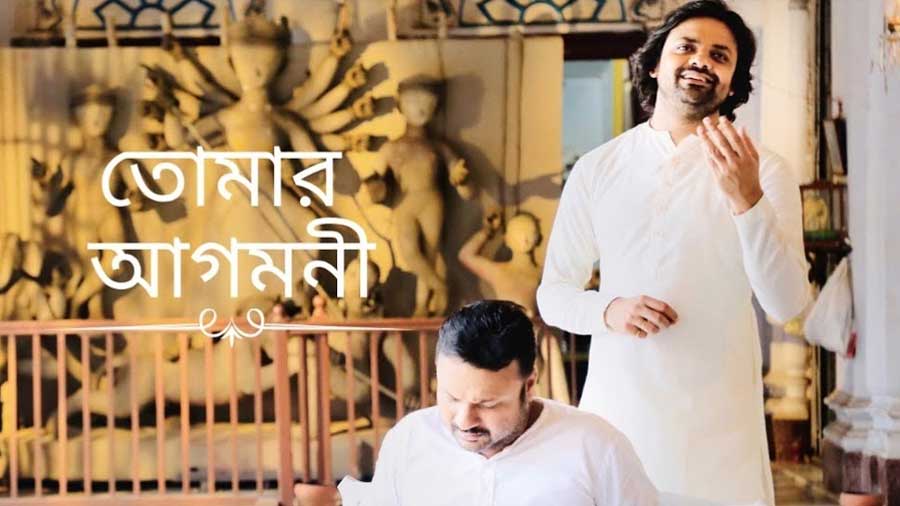 Sourendra-Soumyojit’s Ode to the Goddess


‘Tomar Agomoni’ is a multilingual and multicultural experimental musical piece

Opening with the festive outing of Chhau, Sourendra and Soumyojit, Tomar Agomoni, showcases the ethics and multicultural fabric of Bengal. The use of pujo elements like alpaca, kansar-ghanta and pradips essential elements of Kolkata like heritage buildings, Ganga and city streets, blend with the lyrics to deliver a cinematic experience full of nostalgia and awe.

Homage to Birendra Krishna Bhadra, Pankaj Mullick and Bani Kumar, the song that has Soumyojit on vocals and Sourendra on piano, released on Mahalaya (October 6) is an ode to the goddess Durga.

Written, composed, produced and directed by the musical duo Sourendra and Soumyajit, and supported by an eclectic ensemble of artists like Kalyan Majumdar on sitar and Samar Das and the dhaak team to name a few, the The song’s original screenplay clip was taken from Bani Kumar. The multilingual collaboration including English, Italian, German and Russian was translated by Partha Mukherjee.

Tomar Agomoni has nearly 26,000 views on YouTube and received wide appreciation from viewers.

Sam Fender Heads To Number 1 With Seventeen Going Under