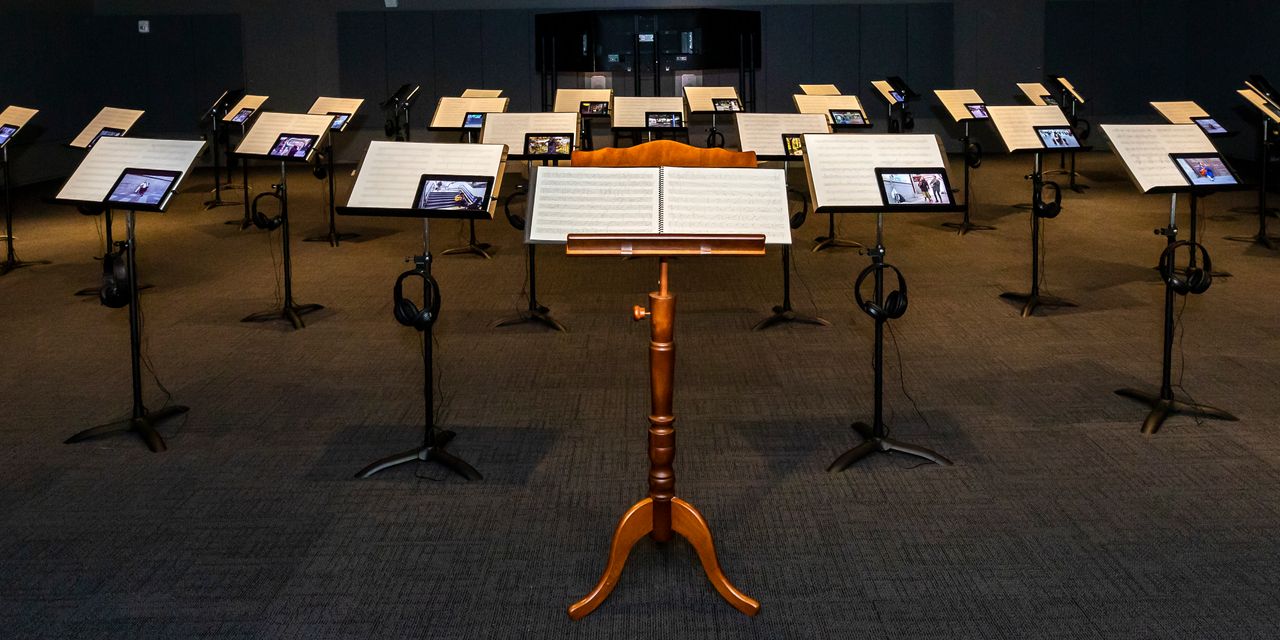 Music has long inspired artists, from Whistler’s Painted Nocturnes to the syncopated abstraction of Mondrian’s “Broadway Boogie Woogie.” But these days, many artists incorporate music directly into their work, often inviting viewers to collaborate on its interpretation.

Sound is at the heart of the work of Janet Cardiff and George Bures Miller, Canadian artists who collaborate on multidisciplinary installations. In “The Forty Part Motet” (2001), visitors can move through a room containing 40 loudspeakers, each playing the voice of a single singer in a recording of music by Renaissance composer Thomas Tallis. The springboard for their 2018 installation, “The Instrument of Troubled Dreams,” was a 1960s device called the Mellotron, a piano-like tape player whose keys played different recordings. Ms. Cardiff and Mr. Miller have created a digital Mellotron which, while resembling the original, incorporates not only instrumental music but also vocals, spoken story fragments and a host of sound effects.

Pressing the keys produces sounds such as timpani, viola, and guitar as well as cooking noises, carnival, and multiple wind speeds, all neatly identified with embossed plastic labels. “We were building a toy that we wanted to play with,” says Miller. “We quite often like the idea of ​​an infinite piece of music,” adds Ms Cardiff, noting that “with this piece, everyone is going to combine it and play it in such different ways that it’s almost limitless.” ‘The Instrument of Troubled Dreams’ is currently heading to western Germany for an exhibition opening March 27 at the Lehmbruck Museum in Duisburg.

Musical instruments merge with bodily movement in “Soundwaves: Experimental Strategies in Art + Music,” on view through May 14 at Rice University’s Moody Center for the Arts in Houston. The show’s 15 artists have “a sustained relationship with music,” says its curator, Moody Center director Alison Weaver. “Corporal and emotional and in some cases spiritual.

“Body Instruments” (2021) by Turkish artist Nevin Aladag – a set of “accordion wings”, foot bells and two drum-like hats – emphasizes the physicality of musical creation. The same goes for Nick Cave’s ‘Soundsuit’ (2013), a wearable sculpture incorporating a dense tangle of beads, metallic flowers and other materials that imply music and movement even when at rest. A gallery performance on April 14 will feature Ms. Aladag’s instruments in action and other works, including “Transition” (2020) by Israeli-born artist Naama Tsabar, a wall sculpture that includes a disassembled but still functional amplifier .

For Madrid artist Carlos Garaicoa, the city itself is a source of music. “Street musicians to me are something you find everywhere,” he told an interviewer last year. “A common language. His 2017 installation “Partitura”, the Spanish word for a musical score, is based on the video performances of 40 street musicians in Madrid and Bilbao, including an opera singer, a cellist, African percussionists and a accordionist. Visitors can watch and listen to individual performances on electronic tablets placed on desks, which also contain line drawings by Mr. Garaicoa. Three large video screens broadcast an 18-minute video in which all the recordings are woven into a sustained and harmonious musical work by composer Esteban Puebla, complemented by animations of Mr. Garaicoa’s drawings, which suggest musical notations freed from their grids.

“Partitura” creates a “sense of unity from such incredibly disparate sources,” “subtly altering our perception of the city,” says Trevor Smith, associate director of the Peabody Essex Museum (PEM) in Salem, Mass., where the work recently ended its run. Mr. Garaicoa will return to the museum in May to receive the inaugural PEM Award for Creative Expression and Civic Engagement. The celebrations will include a festival of street musicians and the performance of a new score by Mr. Puebla based on the music of “Partitura”.

The dynamic of musicians playing alone but together, creating a whole from disparate parts, also shapes Ragnar Kjartansson’s nine-screen video installation “The Visitors” (2012). Filmed in Rokeby, a slightly decaying historic estate in New York’s Hudson Valley, the 64-minute work depicts each performer on a separate screen in a different room – bedroom, library, kitchen and elsewhere, including M Kjartansson in a bath – listening intently to each other on headphones. Individually and in unison, they play and sing evocative and repetitive lyrics like “Once more I fall in / My feminine ways”. At the end of the performance, the musicians come out of their isolation to gather on the lawn, where they appear on a single screen, singing and dancing.

“The Visitors”, which the Guardian named the best work of art of the 21st century, is a key work in the collection of the Broad Museum in Los Angeles, where it is on view until April 3. “The repetition of the choruses and their verses is what makes it powerful,” Broad curator Ed Schad observes. “Each character across the nine screens goes on a journey with these simple lyrics.”

“We thought it would be great to show it in the pandemic,” he adds. “The piece is very intimately about the experience of being separate and coming together. And enduring and persistent.

The Quietus | Features | Reissue of the week