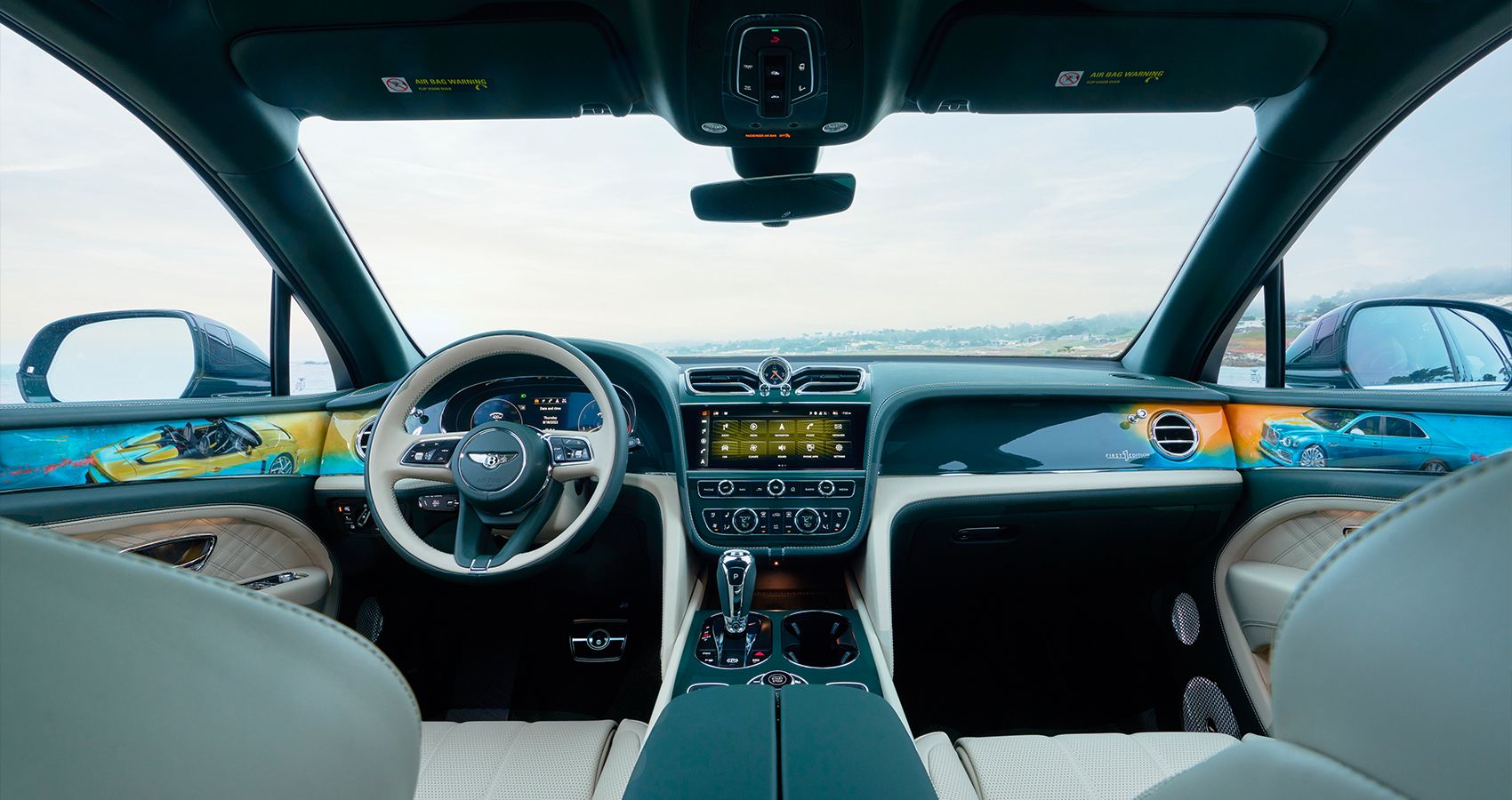 Bentley made all kinds of good noises in the automotive world with their new cars. While the Bentley Mulliner Batur grabs the headlines, one of their new cars is literally a work of art. The company’s in-house body division has created the Bentayga EWB Mulliner Gallery, a unique special car that has become a drivable installation of exquisite craftsmanship.

Originally created by the team at Mulliner Design, the individual artworks have been reproduced on beautiful wood veneer by British airbrush craftsman Piers Dowell and his protege Lewis Warby. The car features four works of art, including the restoration of the 1939 MkV Corniche, delivered by Mulliner, The Blower Continuation Series, The Bentley Mulliner Bacalar and The Flying Spur Mulliner.

Built in one of the last pre-production Bentayga EWBs as the car nears its official production start, the artwork sits in a four-seat cabin in Portland and Cumbrian Green leather, with stitching and contrasting emblems. The aft cabin gets a pair of the world’s most advanced automotive seats, via the airline’s seat specification. Like the interior, the sporty Cumbrian Green mirror-finish paintwork paired with polished 22-inch wheels and gleaming chrome continues the theme on the exterior.

The Bentley Bentayga EWB Mulliner Gallery features intricate artwork showing off the company’s colorful pedigree. Here’s a look at the art, the artist, and the car.

The six pieces of veneer—four door waist rails and two front fascias—together form a ring of wood around the cabin, with each door featuring a different Mulliner design.

Beginning at the driver’s side rear passenger door, the waist rail depicts the Blower Continuation series – the series of 12 new hand-built Bentley blowers, mechanically authentic to the original 1929 No. 2 team car driven by Sir Henry ‘Tim’ Birkin. Forming the world’s first pre-war continuation series, all 12 cars are either under construction or have already been delivered to their owners. The Blower Continuation Series will be followed by the recently announced Speed ​​Six Continuation Series, a series of 12 identical cars that will recreate the specification of the Speed ​​Six that won Le Mans in 1929 and 1930.

Then, on the driver’s door, the Bentley Mulliner Bacalar is recreated in its original yellow launch specification. The Bacalar marked Mulliner’s return to true coachwork, with the hand-production of 12 Barchetta-designed cars, each individually co-created by their client in conjunction with Mulliner Design. The Bacalar proved an instant hit – with all cars booked before the project was announced. Eight cars have been delivered and the last four are in the final stages of hand-finishing in Mulliner’s Crewe workshop.

The Bacalar artwork flows from the waist rail into the driver fairing. On the opposite side of the cabin, the front passenger door artwork also begins in the passenger instrument panel and blends into the door space. The star car for this veneer is the Flying Spur Mulliner – the flagship car of the Flying Spur family.

Launched at Monterey Car Week last year, the Flying Spur Mulliner is Bentley’s ultimate luxury sedan and showcases what can be achieved when Bentley engineering and design meet Mulliner craftsmanship.

Finally, the rear passenger-side door shows the unique 1939 Bentley MkV Corniche – a once long-lost car that forms a crucial link in the design history of Bentley’s most important models. Mulliner has completed a complete reconstruction of the only MkV cornice ever made, which was originally destroyed in World War II. The project highlighted the brand’s pedigree in design and technological innovation and the breadth of skill within Mulliner. The reborn car connects the legendary Embiricos 4¼ Liter and the famous 1952 R Type Continental.

Related: The Bentley Flying Spur Mulliner Has A New Dark Side

Piers Dowell is one of the most technically accomplished airbrush artists in the world. Working from his studio in Tenbury Wells, Worcestershire – just 60 miles from Bentley’s home in Crewe, Cheshire – Piers creates artwork of incredible detail and vibrant color using murals, guitars, racing helmets and a number of other non-porous 3D objects as its substrate. His mastery of airbrush color and his expertise in working with the precious wood of the guitars made him the perfect artist for this project, replacing the musical instruments with Bentley veneer, cut and shaped by hand in the Dedicated Bentley Wood Shop.

Piers has honed his skills over the past 31 years and now produces work that is not unique in concept but also technically feasible by only a handful of people worldwide. This mastery makes his strongly thematic works desirable as works of art in themselves.

Related: How the Bentley Bentayga EWB Compares to the Mercedes-Maybach GLS

Bentley claims the Airline Seat specification is the most advanced seat ever fitted to a car, with 22 adjustment modes and world firsts in a new automatic climate sensing system and postural adjustment technology.

The Bentayga EWB continues this philosophy with the inclusion of integral electronic steering and Bentley Dynamic Ride as standard. The Bentayga EWB is powered by Bentley’s proven 4.0-litre V8 petrol engine, which combines immense power with impressive fuel economy.

For people like us who consider cars themselves an art form, the Bentley Bentayga EWB Mulliner Gallery literally brings exquisite art to those who sit in one of the world’s most luxurious SUVs. You can’t quite sum up what it would be like to be inside such an artsy cabin, but you’re sure to be there for quite some time.