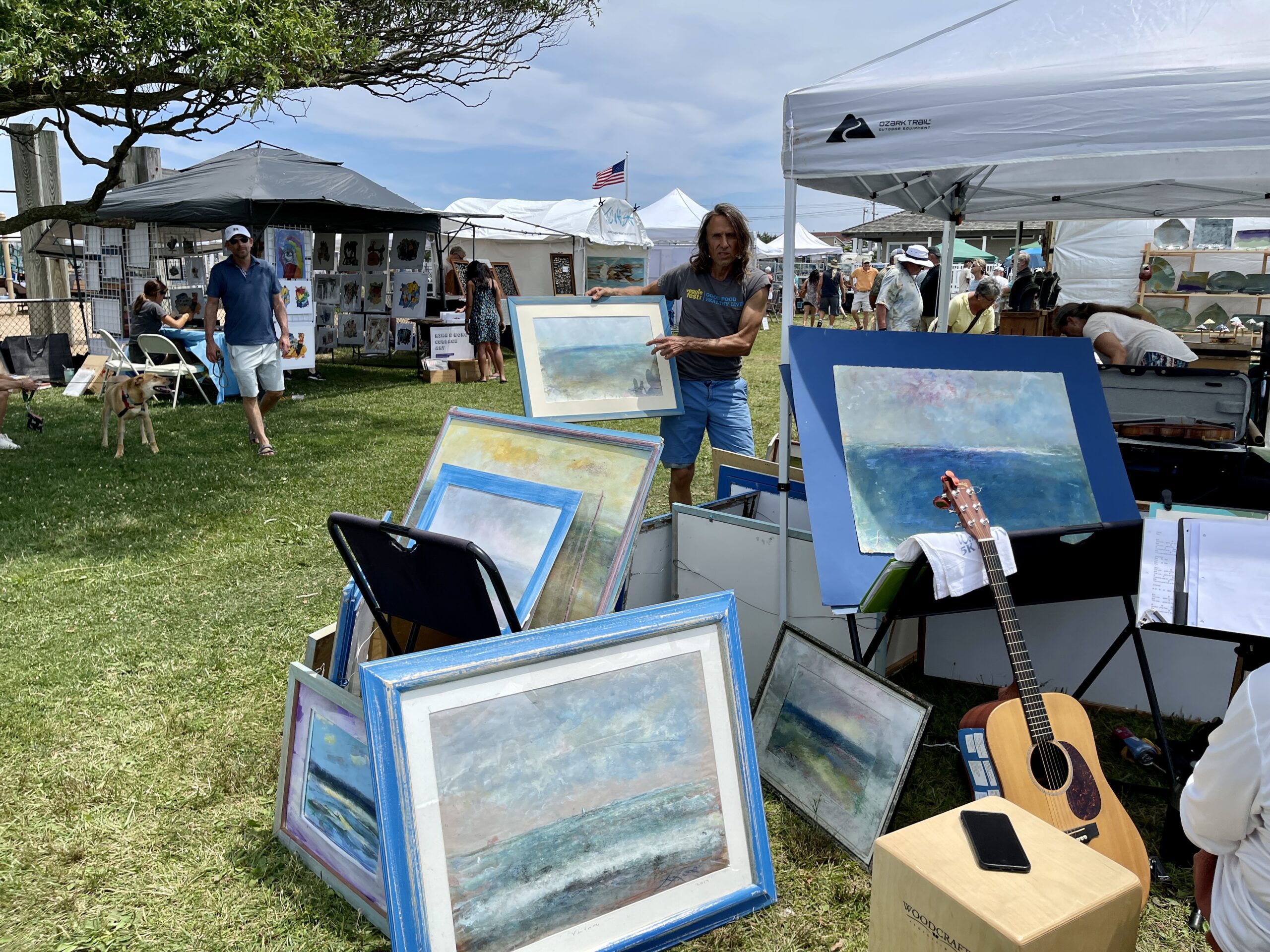 The Harvey Cedars Arts Festival is a feast for the senses

IMAGES AND SOUNDS: Steve Kuzma is a mixed media artist and musician from Somers Point whose technique consists of layering paint and various media, for a luminous effect. (Photos by Victoria Ford)

At the 35th annual Harvey Cedars Arts Festival in Sunset Park on Sunday, July 17, tables and tents filled with unique treasures wrapped around the grounds, dazzling the eyes of “buyers.” The work and wares of dozens of long-time and first-time participating artists lit up the landscape.

Susan Kramer, volunteer founding director of the festival, was delighted with the result. She said she strives for a balanced variety and a layout that flows well. Artists brought paintings, photographs, metalwork, ceramics and pottery, woodwork, jewelry, and many funky and harder-to-label items. 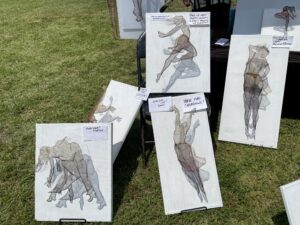 Artist Peter Robinson Smith and his wife, Mae, live in the mountains about 20 minutes north of Brattleboro, Vt. Since July is his birth month, he explained, they turn their annual pilgrimage to the Harvey Cedars Arts Festival into a few days of celebration—another full circle around the sun, at the beach.

According to the artist, his figures, sculpted from industrial-grade copper and aluminum mesh, are best described as architectural reliefs. Although the pieces are carved, they are not “sculptures”, he explained. The distinction is important because it is such an unusual art form that it merits further classification.

Smith was raised on the North Shore of Massachusetts, he said, so “the ocean means a lot to me, it’s very therapeutic.”

He and Mae started participating in the island’s artistic community seven or eight years ago, they said. Smith’s work is also displayed in Wildflowers Too! gallery at Barnegat Light.

Mae is a big help to Peter behind the scenes.

“We are inseparable,” he said. “We do everything together. One of us cannot do without the other. 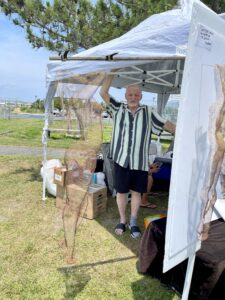 As for how he came to carve reliefs of human and animal shapes, Smith said he “didn’t stumble. I have made art all my life. I was an art teacher for many years on and off; I knew the material because I worked with young people who made masks from recycled mosquito net, and one thing led to another from there.

“Before that, for about 12 years, I was becoming known for my landscape watercolors,” he said. An art scout in Stowe, Vermont bought a few pieces from him, and as far as he knows, at least one or two of them ended up in the basement collection of the Metropolitan Museum. He has been told that his work is destined for “Antiques Road Show” one day.

Smith said it was an easy transition from landscapes to figurative art.

“At least half of them or more came out of my imagination,” he said. He hasn’t worked with live models for 35 years, he added.

Its material/backing is industrial grade copper and aluminum wire mesh, not regular screening. His only tools are his fingers, his hands, his scissors and his heat – and sometimes something with a sharp point nearby. He burns the knit to soften it first, then he shapes it, lacquers it and bakes it.

“When I make them, I don’t pay any attention to light or shadows. These are a subplot. I just do my job and then the light does its job on them. 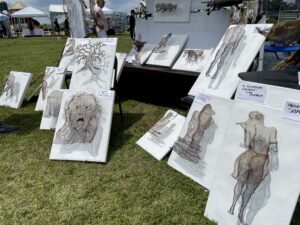 An abstract piece he exhibited at the Harvey Cedars Arts Festival is his homage to Gustav Klimt; another standout was his prehistoric seabird. He doesn’t find much time for watercolor these days.

“It’s an outgoing process,” Smith said. “I don’t think about what it brings me. Catharsis, liberation. It’s my therapy – and believe me, I need a lot of it.

The festival was a public first for High Bar Harbor painter Sally Evans, who sold her vibrant, motion-filled works of art depicting local scenes, wildlife and waves. Evans dove into oils in 2019.

“I’ve always been able to draw, but I’ve never tried to paint,” she said. In 2008 she started “Sweet Sally’s Garden Glass”, assemblages of pieces and pieces – a paperweight, a vase, a plate, a depression glass and other found or specially selected objects. Since she was invited by a friend to put the brush on the canvas, she has been on a roll. Now she spends her winters in Florida and her summers on LBI.

Most of her compositions and subjects come from her own mind, she said, with some helpful research (“How exactly does a wing fold?”), but sometimes she works from a reference photo. “Strike a Pose,” for example, is taken from a photo she took of a group of birds. She added depth and detail to the background, but a viewer wouldn’t know where her reference ends and her imagination begins.

The Harvey Cedars show provided “a lot of validation,” she said, which feels good, especially from other artists, she added. 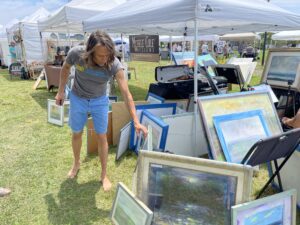 Steve Kuzma of Somers Point is an award-winning contemporary impressionist with decades of experience as a professional illustrator and a focus on/calling to the healing arts. He captures the essence of light on canvas by layering water-miscible oils. Using watercolor paper as a substrate, her process involves linseed oil, wax glaze, oil paint and pastels.

“When you put this in your house, it will shine because of the way the paint is layered,” he explained to a curious couple passing by.

Kuzma graduated from Parsons School of Design and worked as a sports illustrator in New York before turning to a more natural, even mystical way of life.

He and his friend Bruce Soboleski played amplified guitars during the festival, to pass the time and facilitate a certain relaxed atmosphere.

“I always feel better here (on LBI),” Kuzma said. His ties to the island date back to high school in the 1970s, he said, when he and his miscreant friends came to the beach in search of adventure. “There is something special about this island,” he said. “Maybe it’s the quartz in the sand, the ocean is cleaner – I don’t know.”