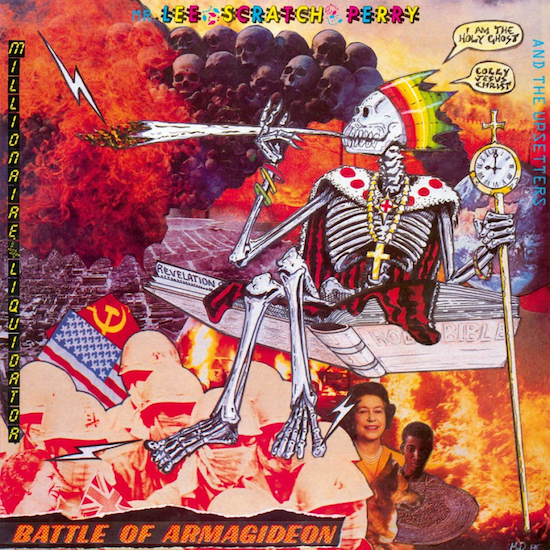 The Quietus | Features | Reissue of the week

Beware of “madness”, the “loon” or “moon genius” motif in popcrite. Beyond its insensitivity to the nuances and complexities of mental illness, it is remarkable that it is so often used as a power play that plays out when white male critics talk about female artists or black artists. It is a reductive way of thinking that stems from the assumption that having a mental illness promotes, nurtures, and sustains creativity. Sylvia Plath, Dostoyevsky, Brian Wilson, Kristin Hersh, and of course Lee Perry all had the same “troubled” and “eccentric” epithets surrounding their work, primarily to prevent proper inquiry into the motivations and meaning of their art.

In Perry’s case, this alteration in his mental state served two purposes: to shed light on the exploitation of his work by American and British labels, and to ensure that – as always with black genius – his work retained a comforting “instinctive”/”intuitive” connotation. (as opposed to intellectual animosity). Black artists from Screamin’ Jay Hawkins & Little Richard to Perry and Kanye aren’t allowed to just be creative geniuses. Their work can only be understood by white critical consensus as emerging from some aspect of mental “failure” or slippage in sanity. Basically, the claim is that they only encountered genius by accident and bring their vision to us like mad scientists or deranged prophets who barely control their work; and it’s to the point where it’s only through the benevolence of white businesses, white record company bosses, and a white music press that anyone can hear it.

The idea of ​​Perry as a compelling, cohesive artist who has used drugs and spirituality to inform his music just doesn’t sit well with a music press hungry for titillating glimpses into a so-called exotic derangement in progress. Even when Perry passed away in 2021, what was shared even by those who offered fond memories more often than not was not a glimpse of Perry’s sound, but rather a litany of “quirky” moments shot with seemingly no awareness that the “madness” may well have been one of Perry’s own strategies, a safe self-directed representation that drove people away, especially those whom Perry naturally saw as vampirically interested in stealing his sounds, his work, and his music. There is a very revealing moment in a NME 1981 piece in which Richard Grabel meets Perry in New York, and amid Scratch’s usual Sun Ra-esque claims about his own immortality and purpose (“I am a prophet and a teacher, my name is Archangel Gabriel “) the questions become less overtly inviting Perry’s demagoguery and becoming more closed and specific.

Richard Grabel: “About two years ago, when you took down the Black Ark, people started saying you were crazy.”

Lee Perry: “In the past, the people I’ve dealt with have been thieves, criminals, parasites and vampires. There’s not one I can say ‘That’s a good one’ None. All I see in this business is singing parasites, singing lies, singing something they don’t mean. It really bothers me, man. It really drives me crazy. Of course I am the craziest. You witnessed it. Why, you think I want to deny it? So if I see a guy trying to get mad like me and I have competitors, I think it’s your fault . If people think you’re crazy, they stay out of your way. Alright! I don’t mind. Ha ha ha.”

You can see Perry’s artful construction of “madness” as a narrative in his work throughout interviews with the music press of the late 70s and early 80s, and one has to wonder if the growing eccentricity endlessly reported from Scratch in Jamaica at this time stems from gathering paranoia incubated in the cultural crossfire of Jamaican politics, or whether it’s just a tactic Perry uses to alienate worshipers, adherents and the antagonists of his home, his studio and his music.

By the time Perry was recording Battle of Armagideon (millionaire liquidator) in 1986 – currently being reissued alongside 70s classics like Battle Axe, The blood of Africa and Cloak and Dagger – he was eager to go along with his portrayal of a madman, a demented seer, a shaman, and of course he was always able to provide hungry investigators with the necessary declamatory statements to further support this stereotypical image. We would be foolish, however, from our contemporary point of view, to read Perry’s interviews at face value. He was playing a game and protecting himself, and above all, we must not let this “crazy” motif distract us from the music he was making. Like the reissue of Armagideon proves that he was always blessed with a laser-like focus and discipline in his work that completely belied the ‘out of his mind’ rhetoric and, most importantly, that snapshot of a time when Perry was finding new resonances with like-minded musicians from outside Jamaica.

Armagideon (like its follow-up, the powerful Dub Syndicate collaboration Time Boom X From Devil Dead) was recorded in London. The staff Perry referred to as the Upsetters at this point were crucial to the album’s genesis and creation. The band which recorded at Thameside studios in south east London consisted of Peng (drums), Tarlok Mann (lead guitar), Russ Cummings (piano, synthesizer), Mark Downie (rhythm guitar, synthesizer) and Trevor Jones ( trombone). Downie aka Marcus Downbeat was the main catalyst here. He had met Perry in London at the end of 1985, posing as a fan, before being invited to rehearse with Perry and the band Dub Factory – first in a friend’s garage, then finally in a studio for Trojan Records. Dub Factory was a mixed multi-racial group of players including white British, Anglo-Jamaican, and Anglo-Indian players.

Russ Cummings recalls the recording process as a few hectic, stoned weekends – during which the band slept in sleeping bags in the studio, spending all day recording, following the instructions from Lee. Perry was proud of this new iteration of the Upsetters. Cummings recalls that when pressured by London Rastas to explain who the “white boys” were, Perry would always reply, “It’s my band, the Upsetters, they’re white but they have a black man’s soul .” It was this immersion among London musicians, a new Upsetters, that put Lee back on track in the late 80s, particularly when he later met enthusiasts like Adrian Sherwood and the On-U stable where he found both confederates and sanctuary. But before that happens, Battle of Armagideon – after a period in which Perry’s work seemed hazy and indulgent – became his sharpest release since the Black Ark years, containing new classics like “Introducing Myself” and the darkly ambiguous “I Am A Madman”. who would soon become mainstays of Perry’s live set for decades to come.

The ‘crazy’ motif is both accentuated and dispelled by the treatment of Perry’s vocals throughout the record – double-tracking to the point where it seems like Scratch isn’t just speaking to the listener, or the world at large, but to himself. The opener “Introducing Myself” immediately suggests that with these new musicians, Perry had found a way to re-invoke the fetid majesty and apocalyptic insight of his old Black Ark recordings, but more importantly, it sounds Costs – not just a retrograde pursuit of old roots textures and sounds, but an album far closer to the similar low-end explorations made by the likes of African Headcharge and Bill Laswell at that time. ‘Drum Song’, despite its jaunty almost Cajun accompaniment, is thick and seething with detritus – vocals, vocals, playing happily abandoned and Perry torn between characters as a sweet toaster, brimstone preacher and conductor of his new Upsetters. “Grooving” sounds almost like sampladelia – soft love-rock chorales blend beautifully with a swelling roots-reggae undertow, Perry vocally climbing around the track as the lyrics leap around the planet – reflecting Perry’s itinerant life. back then, his raps and croons and whispers popping into your peripheries, refusing to take center stage but making sure you know he’s proud of this amazing new music he’s making.

“All Things Are Possible” positively fizzes with freshness, and you begin to realize that not only has Perry multi-tracked himself, but he’s actually stepped into several vocal personas that range from freewheeling falsettos to close, intimate rage. and intensely controlled that beats at the heart of this disc. It’s like seeing and hearing Perry in the crossfire of his own life, his life that for so long has been so emblematic of precisely the cultural and political undercurrents of his Jamaican base. Now a citizen of the world, he has achieved objectivity but also a desire to reflect the chaos from which he emerges. ‘Show Me The River’ trades in old soul imagery of deliberate stasis while watching a river flow, but there’s no escaping the fact that it has ‘nothing to do’ while watching. the Thames flow. It’s a track eerily reminiscent of The Specials’ “Do Nothing” and sounds like the brackish depths of Perry’s deep past rushing into a possible future.

“Time Marches On + In/Out Mix” is perhaps the most brutal track here – an utterly desolate, almost industrial soundscape over which Perry crawls, singing an eerily hopeful anthem to redemption and immortality. On ‘I Am A Madman’, Scratch calls himself a madman, a villain, a cultist, always with the telltale disinterested refrain ‘yeah yeah yeah’ after each assertion – his ambiguity, his strategy around these stereotypes is clear to hear, as the new The Upset sinks into perhaps the most molten grooves on the album and Perry soaringly asks: “[What happens when you] tell the truth and see what it costs?” Often characterized as a fatal disco dud, ‘Sexy Lady’ actually points to the dub-house connections made by electronic artists in the early 90s and the album ends with a direct version of ‘Time Marches On’ which leaves no doubt that far from being lost, goofy or castrated by ‘legendary’ status, Scratch in 1986 was someone with a life of music already in him, which was crucially on something, tired of his own paranoia and stasis and beginning to find new ways to mutate both this bloodline and his own place within it.

As I’ve discussed on tQ before, there’s a tendency, when talking about reggae, to reduce and simplify, to pin the music to certain eras that sit well with the critical consensus. This allows lazy listeners to symbolically tick off an artist as content in a few key texts. Perry’s too good for that and if you think you’re good to go with just super monkey and maybe blackboard jungle this reissue reminds us that we would be crazy not to dive into its resurrection of the 80s which begins with the superb Battle of Armagideon. This reissue is a much-needed and timely reminder that there’s more to Scratch than the bewilderment that even its most ardent obituaries have overstated. The man, when he worked, worked hard and made music that retains an impact and incisiveness that completely contradicts both Perry’s own deviant tactics and the lazy parochialism of the media.