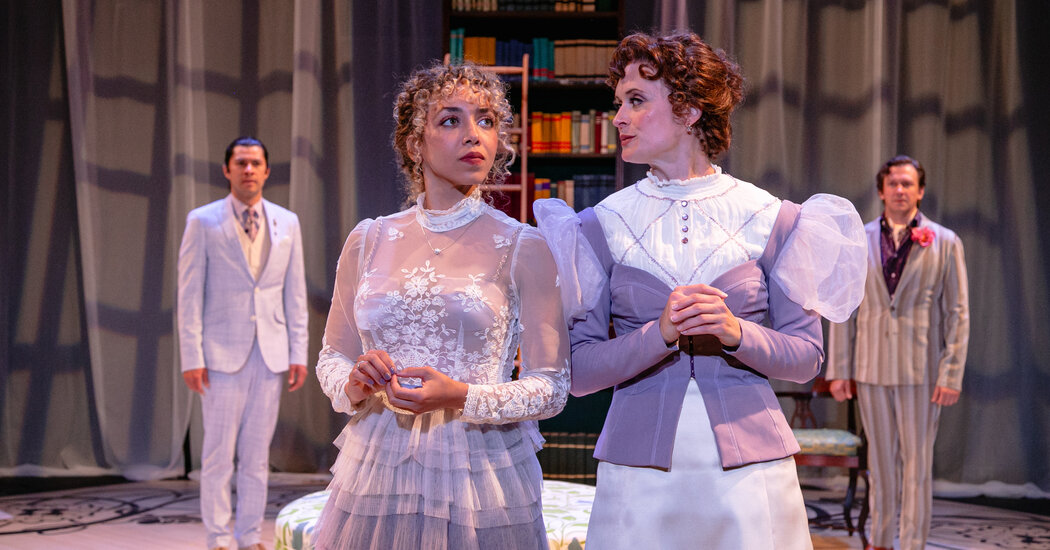 The theater is heading north and in all directions at once

The theater is confusing this summer. As the return to live accelerates, many productions conceived under earlier limitations emerge in a world that seems different from what was intended.

Last week I saw two shows that illustrate the extremes of this mixed moment. One, “The Dark Master,” a Japanese psychological drama, was supposed to be part of a live North American tour, but appeared to be something remarkably different, from a distance but in person, with reality glasses. Virtual. The other, a cover of Oscar Wilde’s â€œThe Importance of Being Serious,â€ was supposed to take place in a socially distant open-sided tent, but ended up tightly packed in an indoor theater, all the world breathing the same air, albeit through masks. .

That the two productions have moved in opposite directions – one towards stricter precautions, the other towards slackening – may be more than an accident of timing; it seems to be an example of content that calls for form. â€œThe Dark Masterâ€ is as stark and antisocial as â€œEarnestâ€ is giddy and chatty, but both productions are intense experiences in part because the changing terrain of coronavirus precautions has made them more of themselves.

I find it hard to imagine how “The Dark Master”, which I saw at PS21, Chatham, NY, and which continues this week at Japan Society in Manhattan, could have been played live. Adapted and directed by Kuro Tanino from an independent manga, it stars Kiyofumi Kaneko as the owner and chef of a hole in the wall restaurant in Tokyo. During the play, he forcibly entrusts the business to a client, demonstrating his best recipes and his worst grimaces.

I’m saying Kaneko is the star, but that’s not quite right. As rendered by virtual reality glasses, “The Dark Master” now puts you in the spotlight. Each member of the audience – there is room for 10 pods of one or two people – is in effect playing the customer trained in the service; without moving at all, you get involved in the action: cooking, eating, sleeping. Kaneko (who, like the other actors, dubbed his lines in English) does not exist in the actual space of the show, yet he leans so close to you that you can feel the urge, like me, to push back. your chair. At the same time, the smells of sizzling garlic and steak push you closer.

Virtual reality is still a toy in the theater, not really mature as an expressive device, and yet its use in “The Dark Master” emphasizes the isolation and interiority of history and also of life during the pandemic. Kaneko may put you in the face – and later you might be confused to find a prostitute you hire even more – but I found myself just as mesmerized by my own weird hands, which of course weren’t really mine, as I could tell by their manicure. Food aimed at my mouth seemed to hit my breastbone instead; I won’t even talk about the bathroom.

Even though I wasn’t always sure who I was or what was going on, that seemed to be part of the problem. Alienation and paranoia, exhausted themes of avant-garde theater, came back in force in “The Dark Master”, partly because of Kaneko’s commitment to the material, but partly because of mine. (Or yours.) Suppressing any outward feeling – you’re not only wearing goggles but also headphones – has the effect of detaching you from the stilts of your own personality.

This effect is heightened by the theater, a beautiful reconfigurable indoor-outdoor space that appears to have landed like an exotic bird in the middle of a former 100-acre apple orchard in this small Hudson Valley town. It’s not the first place you’d expect to encounter peak performance, but the PS21 doesn’t offer much else. In “The Dark Master”, the contrast between the scent fields of astilbe and the pungent prison of your own perceptions makes the two a little more precious.

The Unicorn Theater, where I previewed Berkshire Theater Group’s “Earnest” production, couldn’t be more different: a traditional 122-seat auditorium near the Tony Main Street gift shops and Stockbridge galleries, Mass. If the characters in the play, Londoners with large country houses, were contemporary Americans instead of Victorians, this is where they could spend the summer. Wilde’s comedy, directed by playwright David Auburn, thus feels like an evening of entertainment at a local house, if its owners were people of exceptional mind.

Wilde’s mind is delicate, however; it rests on a rocky base of great moral force, but if it is played with any weight, it sags. The four lovers are entangled in webs of the superfluous – Gwendolyn and Cicely mainly anxious to marry a man named Earnest; Algernon and Jack are obsessed with muffins and cucumber sandwiches – but they have to believe these things are of the utmost importance. And Lady Bracknell, whose faith in her own values â€‹â€‹is absolute, must deliver justice as if it were meringue.

At the first preview I attended, Auburn’s well-cast company was approaching the right balance. As Bracknell, the great Harriet Harris still applied the final layer of comedy to her detailed and nuanced performance, but already made a compelling dragon. Conversely, the lovers (Rebecca Brooksher, Claire Saunders, Shawn Fagan and Mitchell Winter) were still too focused on comedy to fully realize it, missing out on opportunities to let the repercussions of their actions be felt. When the lovers of 1895 first kissed each other, it surely wasn’t a joke; it was a revelation.

My feeling that this cast will soon completely inhabit Wilde’s mind is partly based on how the show is already hitting its marks with Act III, and partly based on its completely successful design. Bill Clarke’s simple and elegant ensemble, all in Art Nouveau swirls in black and white and transparent curtains, suggests the finesse of taste that writing demands. Swinging far in the other direction, Hunter Kaczorowski’s outrageous costumes – Gwendolyn wears a three-foot hat in the country and Algernon sports rhinestone buckle pumps – prove right because of the hilarity.

The exhilaration that comes from the intensity of such choices, whether in design or acting (or, as in “The Dark Master”, in conceptualization), is what we go to live theater for. Since the pandemic has denied us this exhilaration, we cannot get rid of it too soon.

But this intermediate period has its own exaltations. Returning to difficult subjects after a diet that has too often consisted of comfort food and returning to theaters where people congregate and feel – not just get along – laughing at each other, is her own source of emotion. . When Berkshire Theater Group Artistic Director Kate Maguire walked into â€œEarnestâ€ to make the usual pre-show announcements on emergency exits, she first broke down in tears. She wasn’t the only one.

Master of darkness
Performances from June 23 to 28 at the Japan Society, Manhattan; japansociety.org

The importance of being serious
Until July 10 at the Unicorn Theater in Stockbridge, Mass .; berkshiretheatregroup.org