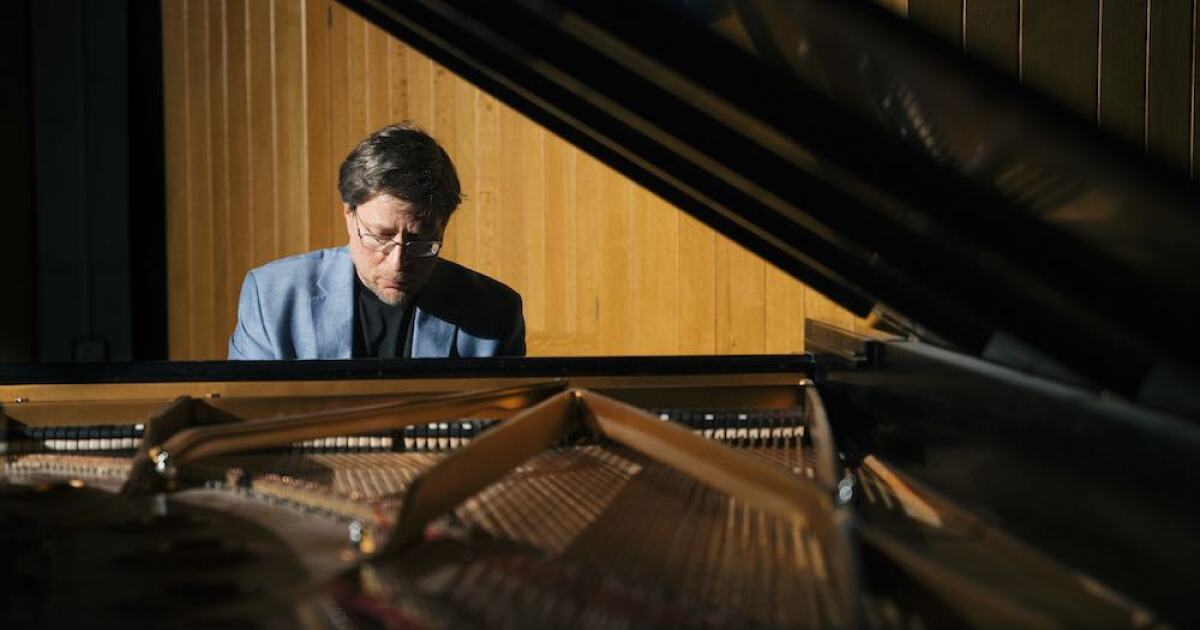 David Feuzeig is a professor of music at the University of Vermont and a composer and touring pianist.

He recently gave up flying to reduce his carbon footprint. Now, he’ll spend the next four years playing a concert in every city and town in Vermont — driving there in an electric vehicle and playing any piano available.

More from VPR: WATCH: How is climate change expected to affect Vermont over the next 30 years?

Play Every Town Vermont concert programs range from classical to jazz and ragtime to Feurzeig’s own compositions. He will also recruit local student musicians from each city to join him.

VPR’s Mary Engisch recently met Feurzeig at VPR so he could play the Steinway grand piano in the Stetson Studio One. The following interview has been edited and condensed for clarity. The conversation begins with Engisch noticing an inscription on Feurzeig’s watch, which he removed before playing the piano. He said he recently started wearing the watch that once belonged to his grandfather.

Mary Engisch: There is an inscription, what does it say on it?

David Feurzeig: It says: “To Fred Kahn, friend and teacher. You know, in any profession, you can be a friend, and you can be a teacher.

I stopped flying a few years ago. And at first I was really quiet about it, you know? Because it’s almost impossible to start a conversation with it, without people feeling defensive and accused. And since there is a moralistic element. So I didn’t tell anyone.

Being able to talk about this tour and this kind of, you know, melodramatic mission to play all the towns in Vermont, it gives me a way to talk about it, it’s depersonalized. And people don’t feel defensive.

And actually, there’s a lot of resonance that people have with that idea. Other musicians, audiences, people really viscerally understand that we’re in crisis, and we have to completely rethink the way we do everything.

I am not a climatologist, and I am not a political scientist or an economist. But yeah, I follow that sort of thing kind of obsessively, because I’m terrified of what’s going on.

I think it’s less about what people do and more about that, again, we’re talking about that, because the changes we need to make are individual and institutional.

But institutional changes are impossible to imagine in a social climate where we don’t talk about them, and where we continue in our daily lives to act as if nothing had happened.

How did you come up with the idea for the Play Every Town Vermont tour?

It’s something the Vermont Symphony Orchestra did in the 1980s. Where, to celebrate their 50th anniversary and their mission to serve the entire state, not just one locality.

That’s probably where I got the initial idea. I will be driving around the state in a solar powered EV.

“[T]he median town size in Vermont is 1,400 people. There are plenty of places without an obvious concert hall that have a working piano, but finding them in the woodwork, calling and seeing what’s there is quite fun.”

So I’m not just looking for a place to play in every city, but ideally a place with a piano. And it turns out to be a kind of “Where’s Waldo?” fun quest.

Now the median town size in Vermont is 1,400. There are plenty of places with no obvious concert hall that has a working piano, but finding them in the woodwork, calling and seeing what’s there Over there, it’s kind of fun.

And David, do you take care of all the booking and finding the venue and the piano for the concert dates?

I have an elite team of interns who are all majors in UVM’s Music Technology and Business concentration.

And it also has a little retro side. When Bach was a young man, when he was 20, and had his first principal concert working for a little prince in southern Germany, he wanted to hear a concert by a great organist from northern Germany. He therefore asked for a month’s leave to go and hear this organist, because he had to walk 280 miles from Arnstadt to Lübeck.

It’s like walking from New York to Burlington, to hear that organist, and then walking all the way back.

Bach, perhaps the greatest Western composer of all time, was somehow able to advance the art of music without, as you say, jumping on a plane.

We learn as we go. We give ourselves four and a half years. I said I would finish by the end of 2026.

It’s about one gig a week, and there are a lot of, you know, professional artists who do a lot more than that! But I think it’s manageable. We will see.

Feurzeig’s next concert will be on Sunday June 12 at Hazen Union High School in Hardwick.

The program will include performances by the Hazen Union Faculty of Music and flautist Leah Gagnon will perform Poulenc’s “Sonata pour flûte”. Soprano Mavis MacNeil will perform songs by Brahms as well as her own setting of “The Oven Bird” by Robert Frost. Hazen Union students Abram Leveillee and Elias Robertson will also sing.

Feurzeig’s solo selections will include music by Mozart and Chick Corea to celebrate Corea’s birthday on June 12, 1941.

Do you have questions, comments or advice? Send us a message or contact us by tweeting us @vprnet.