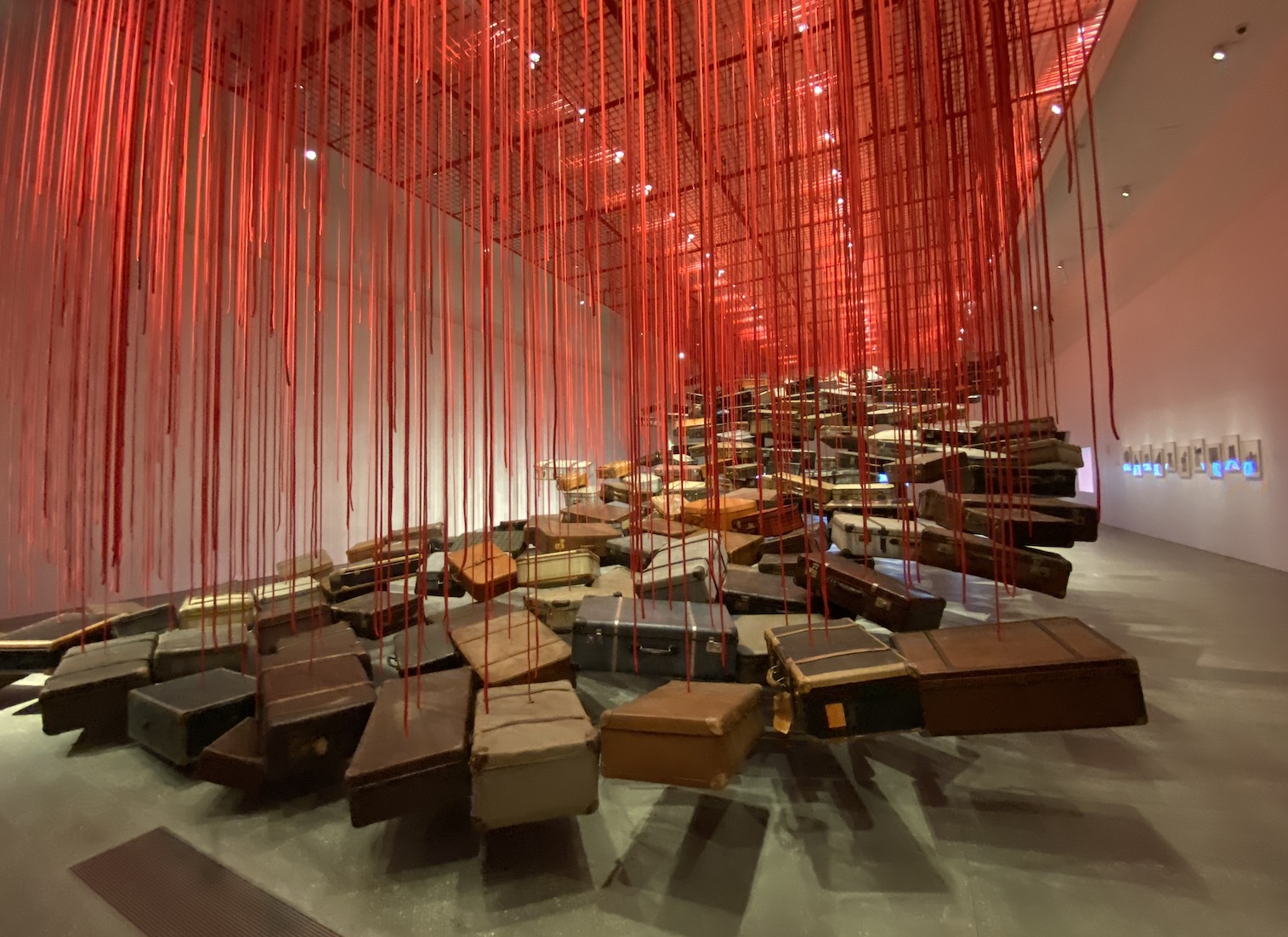 Unraveling the Threads of Humanity by Chiharu Shiota

It’s the exhibition that almost didn’t. The day after curator Mami Kataoka (director of the Mori Art Museum, Tokyo) invited artist Chiharu Shiota to create a major traveling exhibition of her work in 2017, Shiota was diagnosed with cancer.

She underwent aggressive chemotherapy, to come out of her battle as our world began to shut down with the coronavirus pandemic. The exhibit managed to open at the Mori Art Museum in Tokyo in 2019 and briefly traveled to Busan, Korea before being wrapped up and put into storage.

Almost two years to the day, her highly anticipated exhibition at Brisbane’s Gallery of Modern Art (GOMA) – and Shiota’s equally anticipated return to Australia, where she studied in the early 1990s – The trembling of the soul opened with Shiota and Kataoka in attendance.

This is the largest and most comprehensive exhibition of the world famous artist, extended for his run in Brisbane. Shiota has produced over 300 biennial exhibitions and installations throughout his career; 27 projects in 2022 alone. What connects them all is a sense of humanity.

Becoming more: an Australian legacy in an international career

Now based in Berlin, Shiota’s career undoubtedly began in Australia, at the Canberra School of Art (1993-94), at a time when the world was coming to terms with the art of installation and where Australia was beginning to open its eyes to Asia (the first Asia-Pacific triennial was organized in 1993).

As visitors enter The soul trembles exhibition, they come across documentations of his early works from Canberra, including Become painting (1994), which highlights a key moment. Shiota doused herself in red enamel paint, effectively transitioning from painting to painting, and her first step into performance art.

She says the paint burned her skin and stained her body for six months, and she had to cut her hair. It was followed by Accumulation (1994) his first installation using string – a material that would define his career.

I wanted to make a line in the air, draw in the air.

Shiota left Canberra in 1999 to continue her studies in Germany with Polish artist Magdalena Abakanowicz (1930-2017), or so she thought. But she had confused Abakanowicz’s name with performance artist Marina Abramovic. Working with Abramovic would be the next big impact on Shiota’s work, allowing him a freedom that went beyond gender. This universal notion would come to underpin his main thread installations in the future.

The soul trembles features seven of Shiota’s elaborately hand-woven, room-sized installations in red and black yarn. Usually, gallery lovers are lucky enough to see only one.

Exclusive to Brisbane is also a new installation (which will remain in the collection), A matter of perspective 2022, drawing on his memories of bus travels across the vast Australian landscape, endless outback skies and a visit to Uluru.

In the center of a gallery are a desk and a chair, with a swirl of blank paper picked up weightlessly by a network of strings. It responds to the curvature of the earth and the movement of celestial bodies.

There is also a new project for the Children’s Art Center and a video work filmed in Brisbane in 2019 just before the COVID closures. She questions the children in a very direct way: “Where is the soul? “What is the soul?

Today, many blockbusters exploit this sensory and immersive quality – to make the artistic experience palpable for viewers. Words that have been used to describe Shiota’s exhibit over the past week include ‘alluring’, ‘enchanting’, ‘compelling’ and ‘hypnotizing’ – and it is all of these and more.

The exhibition takes viewers on a journey from the intimate to the expansive, from aspects of Shiota’s career that are perhaps lesser known – his early performance documentation and theatrical works – to his highly woven pieces. appreciated that seem to allude to the space itself.

For example, in his installation Silently (2002/2019), black strings rise from a burnt grand piano and, like smoke, seem to diffuse and escape definition. Many of Shiota’s works are based on intangible concepts and emotions, such as silence, absence, anxiety, memories and dreams.

Standing in this work, one can almost evoke the sound of the piano and the smell of smoke. Shiota took a powerful childhood memory of a neighbor’s house fire and turned it into a universal expression of loss that gives audiences the space to find their own connections.

She says of the play, “There are things that sink deep into the recesses of my mind, and others that fail to take physical or verbal form no matter how hard you try, but they exist as souls without tangible form. ‘

Arriving in Berlin, Shiota moved nine times in three years. “When I wake up, I won’t know where I am.” This sense of displacement and relocation is also deeply embedded in Australian storytelling – emotions that are captured in the installation, Where are we going? (2016/2019).

Here, a flotilla of boats is suspended by white strings, all interconnected but neutral, while in the main entrance hall the visitor enters the exhibition through the dramatic work, Uncertain journey (2016/2019), which takes up the motif of the boat but emphasizes an interlacing of red threads. The spectators move under this work rather than around it, cocooned in the emotions it triggers.

This immersive spatial game – of embedded intimacy but withdrawn wonder – is taken up in another major work, Accumulation: destination search (2014/2021), where old suitcases hover in a ramp formation from shin to head height, filling the volume of the gallery. Visitors can walk beneath them, bathed in their shadows and imagine the memories they hold – both tangible and intangible, silent and yet speaking.

This exhibition is charged with humanity and draws from us a range of human emotions, offering a connection with a dimension much broader than our own existence, and evoking the questions of our own soul and our fragility.

During the opening weekend opening speech of the exhibition, Shiota said, “I thought a lot about death and the soul when preparing for this show, and the separation from the body physical and soul.”

QAGOMA director Chris Saines added: “This is a body of work that responds to our most private thoughts, things felt not seen, releasing them in objects or works made with artistic courage and imaginative ambition. What results is lasting spiritual beauty, pathos and wonder – [art] works which, in an extremely slow time, invite us to pause the correspondences between our inner self and the universe.

“The trembling of the soul may well be an inexpressible stirring of the heart.

Chiharu Shiota: The Soul Trembles is on display at the Gallery of Modern Art in Brisbane until October 3.