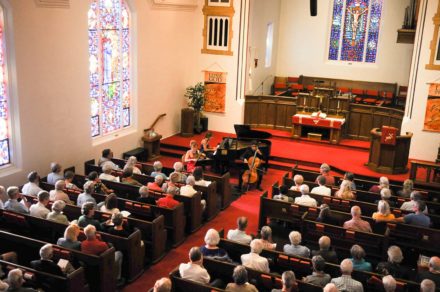 The South Haven Performance Series presents Stephen Lancaster, baritone, and Kevin Vaughn, organist, for a concert on Friday, July 29, 2022. This 7:30 p.m. concert will take place at the Peace Lutheran Church.

Described as “an excellent storyteller” in the American Record Guide and as “varied in tone and alive in feeling” in Fanfare Magazine, baritone Stephen Lancaster engages audiences through a varied repertoire of vocal music. Winner of the Nico Castel International Master Singer Competition and the American Prize in art song and oratorio, he has performed as a soloist in venues around the world, including Carnegie Hall, Chicago Cultural Center, Chiang-Kai Shek Memorial Hall and the Cultural Center. of Belem.

An avid recitalist, Lancaster has performed with many groups and in many places. Chamber performances include recitals for the Gstaad New Year Music Festival, Musique dans le Grésivaudan, Les Grandes Heures de Saint-Emilion and the Uzerche Music Festival. He has recorded an album of French art songs with pianist Martin Katz, Le Menu des Mélodies on Centaur Records as well as Dichterliebe & Liederkreis, Op. 39 with fortepianist Laure Colladant on the Blue Griffin label. Her performances include a wide range of repertoire including An American Requiem, Kindertotenlieder, In Terra Pax, Dona Nobis Pacem and concert works by Bach, Handel, Haydn, Mozart and Beethoven. On the operatic stage, highlights include Anthony in Sweeney Todd and Dancaïro in Carmen with Eugene Opera; Jake Wallace in La fanciulla del West with Apotheosis Opera; Papageno in Die Zauberflöte at the Atlantic Music Festival; Count Almaviva in The Marriage of Figaro with the Opéra Notre Dame. As an ensemble singer, he performs with the Grammy Award-winning vocal ensembles Conspirare and EXIGENCE of the Sphinx organization as well as with TACTUS and Schola Antiqua.

Vaughn holds undergraduate and graduate degrees in piano, organ, and sacred music, including the first Doctor of Musical Arts degree in organ performance awarded by the University of Notre Dame. His former teachers include Phyllis Warner and Craig Cramer. He is a former Dean of the St. Joseph Valley (IN) Chapter of the American Guild of Organists and holds the Guild’s Colleague Certificate.

Vaughn and Lancaster regularly perform together in collaborative sacred music programs for voice and organ. Their debut recording, Sacred Song, was released on the Albany label in 2018. According to Ken Rodgers, music professor at Hesston College, “The approach that Kevin Vaughn and Stephen Lancaster take to finding a balance between organ and voice is exhilarating.

The shows are made possible through the generous support of the South Haven Community Foundation, corporate sponsors and individual donors. Tickets are $10.00 at the door. Students are always free. Doors open 30 minutes before the performance.

The next concert in the series will feature a return from the popular Axiom Brass on Friday, August 26, 2022 at First United Methodist Church.

Ralph Rucci discusses the ups and downs of couture – WWD