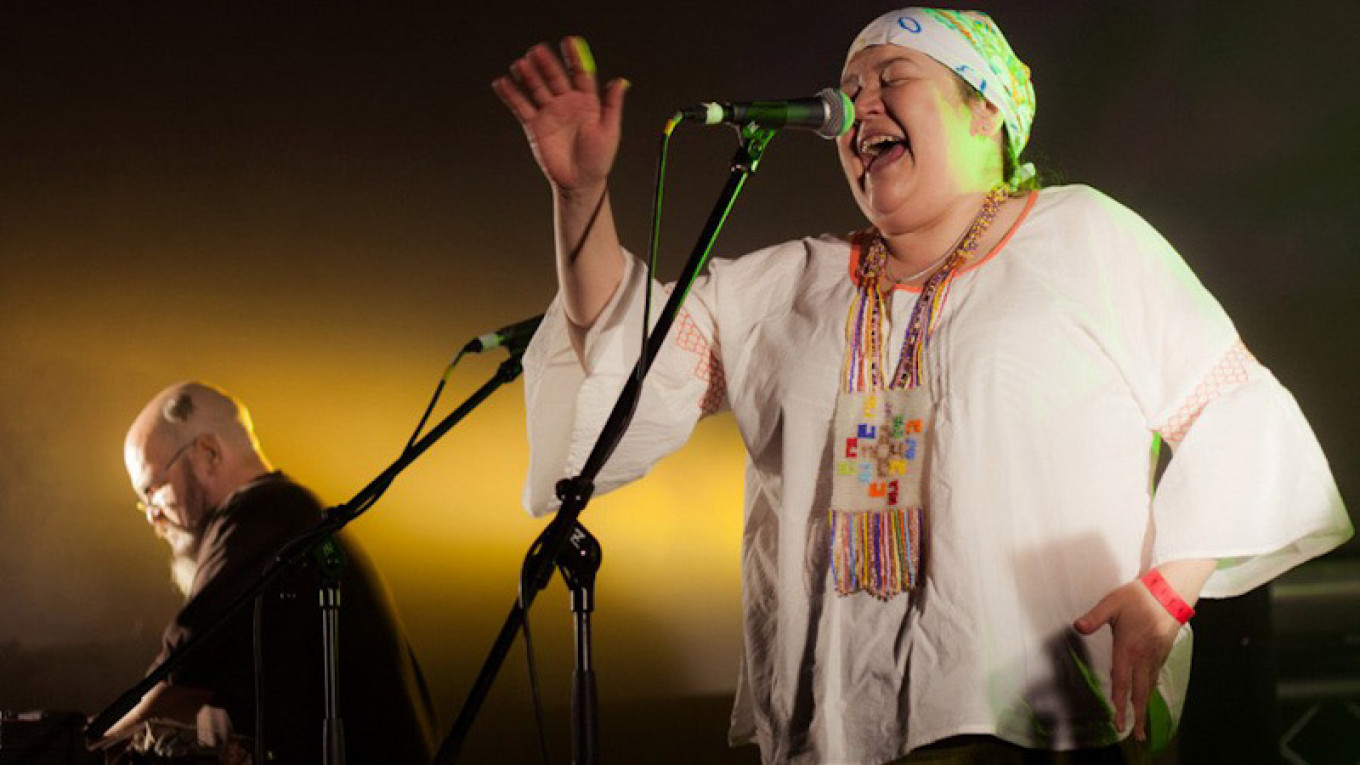 
In the half-light of the stage, the first chords are played while a video appears behind the musicians. As Angela Manukyan begins to sing, her voice and the music send the audience into a trance-like state. This is a performance by the group “Volga” which mixes old songs with modern instruments.

At the heart of the music of the “Volga” are melodies written by Manukyan and performed in the ethnic traditions of different regions of Russia. Some documents are provided by Sergei Starostin, a specialist in Russian ethno-music. Angela Manukyan carefully studies ancient Russian texts, collections of Russian folklore, records and other sources. She is also proficient in various vocal techniques originating not only from Russian folk traditions, but also from the ethnic traditions of the Tuva and Altai republics, Central Asia and the North Caucasus.

The musical group was formed in 1997 on the initiative of the Moscow producer Andrei Borisov. A musician of the same name, Alexei Borisov, described how the band got started: “He introduced me to singer Angela Manukyan, who at the time was trying to record songs based on Russian folklore. We agreed to start working on a joint album in the studio of the very eminent Russian sound engineer and producer Nick Artamonov. I invited Roman Lebedev, a multi-instrumentalist, and Yuri Balashov, an artist and author of the unique instrument “sukozvuk”, which is driftwood with a string stretched over it.

At different times, the group has collaborated and recorded the Spies Boyz, Nikolai Nebogatov, Igor Kolesov and Lazyfish. Borisov calls working with other musicians on stage or in the recording studio “a good tradition” for which “Volga” is now known.

“The music of ‘Volga’ is the result of collective improvisations which at one point seem to be over and turn into songs,” said Alexei Borisov.

“Volga” is pagan psychedelia, shamanism, authentic melodies and lyrics from Russian texts from the 12th to the 19th century, mixed with modern electronic music. They play a synthesis of various musical traditions – ethnic, electronic, industrial, ambient and sonic music – on various stringed and other instruments. During concerts, the group improvises according to each specific situation. The collective’s performances are played against the backdrop of videos created by Moscow videographer Roman Anikushin.

The group has already produced more than ten albums, and they perform all over Russia as well as in Germany, Finland, Slovenia, France, Estonia, Norway and other countries. The group often performs at festivals, such as the recently held AWAZ music festival in Kazan.

See the performances on the group’s YouTube channel, volgamusic.